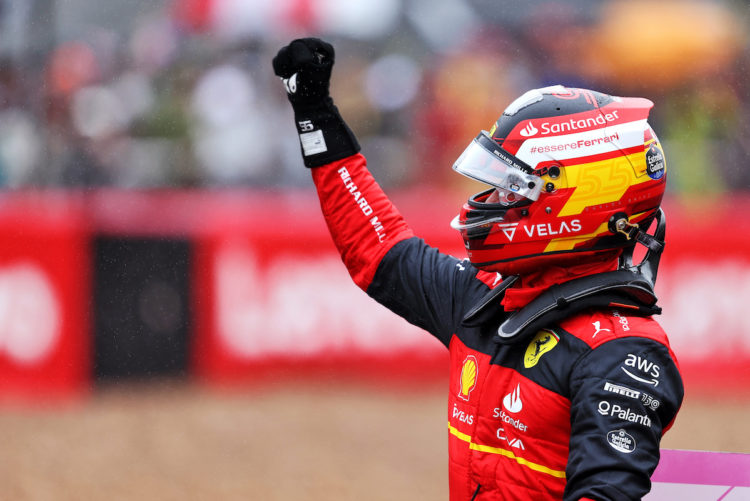 Rain began falling 10 minutes prior to the start of qualifying, leaving the circuit wet, with further showers falling throughout the session.

All of the usual front-runners avoided potential Q1 and Q2 drama and it was Verstappen who set the early pace in Q3.

But Sainz moved to the front with a time of 1:40.983s to eclipse Verstappen by just 0.072s and finally claim his maiden pole position.

Lewis Hamilton finished fifth-fastest as Mercedes remained adrift of the ultimate fight and he will front an all-British row three with Lando Norris sixth.

Fernando Alonso beat George Russell to seventh spot, with Zhou Guanyu ninth, while Nicholas Latifi was a surprise presence in Q3 after navigating Q1 and Q2 in the tricky weather.

The early lap times proved crucial in Q2 as conditions gradually deteriorated through the course of the session.

AlphaTauri had both drivers eliminated during the session, with Pierre Gasly 11th and Yuki Tsunoda 13th, though it was a more competitive showing in the wet compared to their poor dry-weather pace.

They were split by Valtteri Bottas, who strived to improve in the closing stages but went wide at Aintree, while Daniel Ricciardo and Esteban Ocon finished slowest in Q2.

Alexander Albon was unable to replicate the heroics of team-mate Latifi and wound up 16th in the upgraded Williams.

It was a dismal day for Haas and Aston Martin as they failed to progress through Q1.

Kevin Magnussen was only 17th while two-time British GP winner Sebastian Vettel was mired down in 18th spot, ahead of compatriot Mick Schumacher.

Lance Stroll qualified at the back of the 20-driver field, eight-tenths off team-mate Vettel.