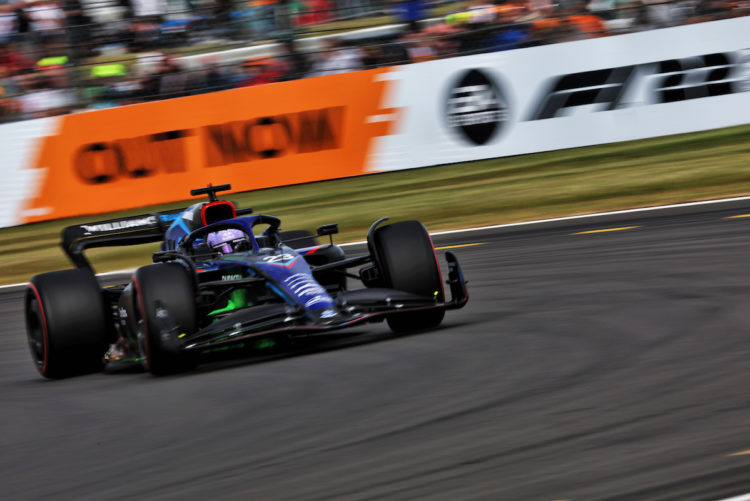 Alexander Albon says reaching Q2 during Saturday’s qualifying session at Silverstone is an “obvious target” for Williams after it introduced upgrades.

The Grove-based squad arrived at the British Grand Prix weekend with a number of new parts attached to its FW44 car.

Williams has consistently been the slowest team on the grid this season, but has scored three championship points courtesy of Albon throughout the opening half of the 2022 campaign.

Having already made it through to Q2 on two occasions so far this year, Albon says that avoiding elimination in the opening qualifying segment is his target for the upcoming session.

“The hope is that we can get the car in a good window,” he said.

“If we can get the balance in a place where I can use the car and push it, get confident in it, that in itself is a good achievement.

“Of course, if you look at ones and zeros point of view in terms of positioning, Q2 would be an obvious target for us.”

Friday practice at Silverstone was disrupted by weather, with wet conditions limiting running during FP1.

While Albon admits it was irritating to miss out on track time when Williams was hoping to gather on-track data of its new components, he still felt confident over their effectiveness.

“It was tricky because everyone didn’t do much running in FP1,” he said.

“When you have an update, you require mileage, so we haven’t had much track time. We had a slight issue at the end of FP2 as well so we didn’t do a proper long run.

“We did maybe six or seven timed laps. Every time we were on track, we seemed pretty strong. It’s good, sometimes updates require big set up changes.

“We do need one, there is some things we need to work on. But it should be achievable and we can get the car in a better window.”