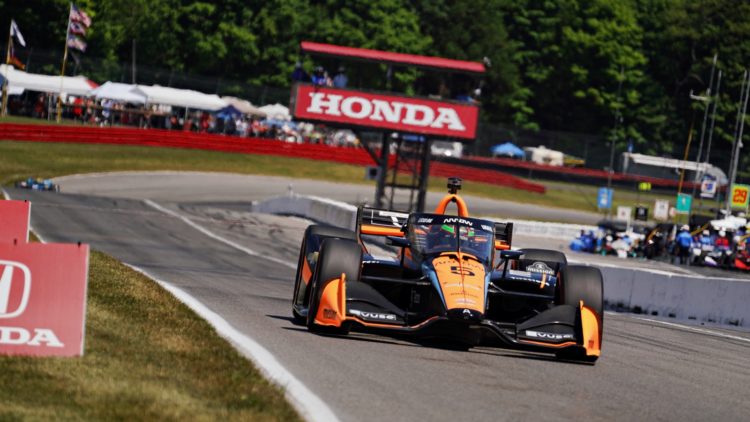 O'Ward put in the fastest lap as time expired on the session. Photo: Kevin Dejewski

Pato O’Ward has taken pole at Mid-Ohio, setting the fastest time of the weekend as time expired on the final Fast 6 qualifying session.

The Mexican driver is the ninth pole sitter from nine races this season, which is the longest such streak in IndyCar since 1961.

O’Ward completed his lap in 1:06.7054, just one tenth of a second quicker than Scott McLaughlin could manage on his final lap.

Colton Herta and Felix Rosenqvist set the third and fourth fastest times respectively, and will complete the second row on the grid for Sunday’s race.

Scott Dixon advanced to the Fast 6 shootout, but was never able to put in a lap quick enough to compete for the pole.  It was the same story with Simon Pagenaud, and both drivers will start on the third row.

Alex Palou just missed out on advancing to the Fast 6, and could not quite put a good enough lap together despite completing both previous sessions in the top five.

Current points leader Marcus Ericsson narrowly missed the cut in the first round of qualifying, and will have to start from the sixth row.

The team that suffered the biggest disappointment on the day was Team Penske.  Josef Newgarden, who was fastest for much of the weekend, was bumped out in the first round and will start down in 14th.

The two-time champion did not indicate that his car had any issues, but rather that he was blocked by traffic.  When 13 cars are on the short 2.26-mile course, it is difficult to avoid all the other drivers when everyone is pushing at the same time.

His team-mate Will Power was on the other end of a blocking incident, and was penalized for impeding Helio Castroneves.  Power lost his fast time and was eliminated in the first round, which allowed David Malukas to advance.

The rookie used his good fortune to his advantage by qualifying all the way up in eighth and nearly advancing to the Fast 6.  Malukas has looked fast all weekend, and showed no signs of slowing down midway through the weekend.

All three members of the Rahal Letterman Lanigan Racing team were eliminated from the first round as well, with rookie Christian Lundgaard placing highest of the trio in 16th.

Drivers will have one warmup session early Sunday before the main event just past noon, which will consist of 80 laps around the tricky course.