The upgrades Mercedes hopes will help it progress at Silverstone 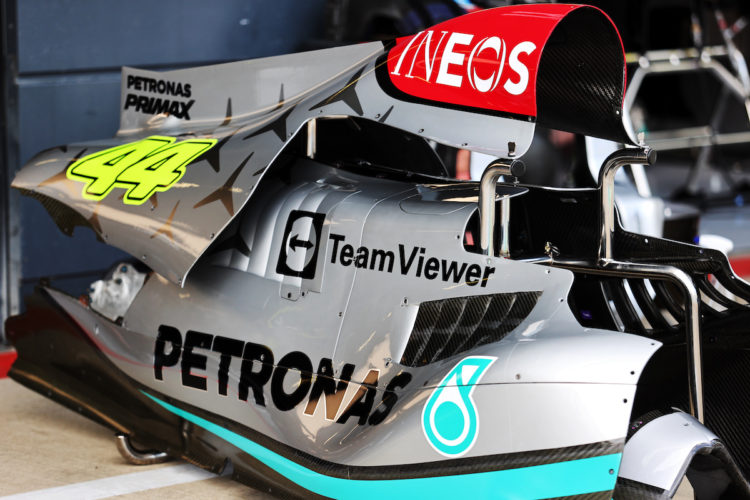 Mercedes has arrived at the British Grand Prix weekend with a number of upgrades to its car, as it hopes to untangle itself from its unpleasant start to the 2022 Formula 1 season.

The team is still awaiting its first grand prix victory of the campaign, a stark contrast to its strong performance throughout the turbo-hybrid era thus far.

It is hopeful that it will be able to enjoy a weekend similar to Barcelona, where its troubles were minimal compared to the struggles it has endured elsewhere on the calendar.

Changes have been made to the car’s front suspension, with “volume added to side of chassis local to pushrod and FTWB rear leg, along with fillet extensions where these legs meet the chassis”.

With this, Mercedes believes that this will “downwash the flow local to the chassis side, shedding a vortex which then goes on to improve the flow underneath the floor”.

At the sidepod inlet, vanes have been repositioned on the chassis to improve flow quality into the radiator duct and aid cooling.

The wing tip at the rear wing has been reprofiled, and is a circuit specific modification to reduce wing load efficiently.

The floor has also received a handful of upgrades. According to Mercedes, these include;

“The amount of incredible work that goes on in the background is quite overwhelming,” he said.

“And it’s phenomenal to see just everyone with their heads down staying focused and delivering.

“It’s always a big push to bring these components to a race, particularly under the circumstances we’re all faced with this year, in terms of the cost cap, for example.

“So I’m very proud of everyone, very grateful for everyone’s incredible hard work and I hope that it reflects when we put it on the track, because earlier on in the year, for example, we did put an upgrade on and weren’t able to extract it all.

“So I hope that that’s different this time.”