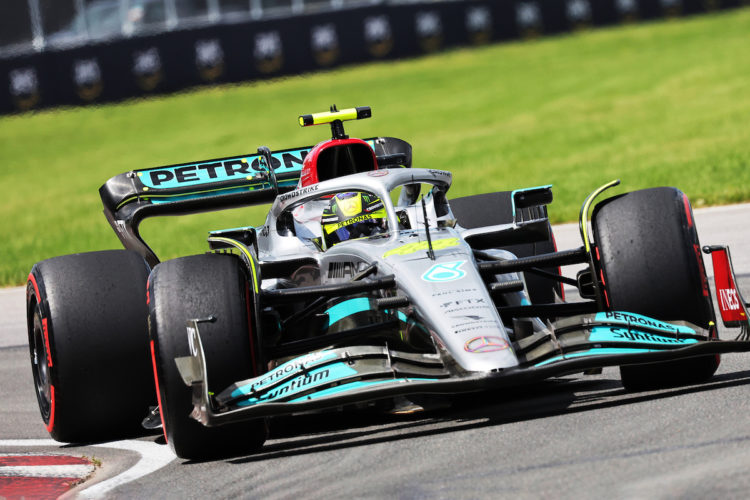 Lewis Hamilton says that he is likely to decrease how much he experiments throughout a grand prix weekend in the second half of the 2022 Formula 1 season.

Mercedes started the current campaign with a car that lacked pace compared to front-runners Red Bull and Ferrari.

Hamilton has taken on a number of set-up experiments this year in a bid to uncover potential from the car.

Last time out at the Canadian Grand Prix, the seven-time World Champion crossed the line in third place, taking his second podium result of the season, after enduring a “disaster” experimental set-up during Friday practice.

“I think moving forwards we will be a little more cautious in doing too many experiments as it really does hinder you through the weekend, especially if you only have practice one and two in the dry and don’t get a P3 for example,” Hamilton said.

“I think there’s lots of learnings from this weekend and improvements we can make moving forwards.

“Really great pace [at the Canadian GP] and it’s so nice to see. It’s not always been the case with this car but it’s so nice to have a good battle with her, or him, whatever you call a car.”

Next on the F1 schedule is the British Grand Prix, a race that Mercedes has dominated throughout the turbo-hybrid era.

The team has confirmed that it is bringing upgrades to the event, and is confident that it can enjoy a trouble-free weekend, similar to the round in Spain earlier this season.

While the team is not expecting to be right on race-wining pace in the near future, Hamilton is sure that Mercedes can recapture speed that places it at the front.

“I really hope moving to Silverstone, it’s such an important race for us, and for me,” he said.

“I just want to be in a battle with these guys. At the end [of the Canadian GP] with the Safety Car and when we started again, I was hoping.

“The dream was that I could just keep in that battle with them and find a way but they were rapid. But we will get there, eventually.”