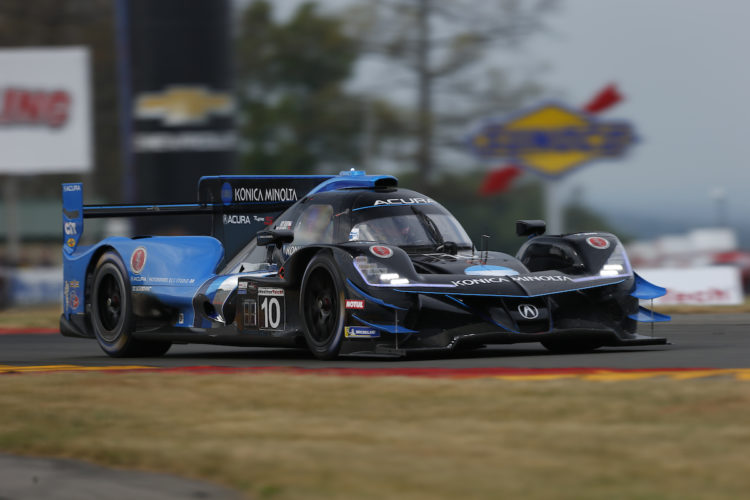 Meyer Shank Racing looked to have covered off the WTR machine just before the stoppage but Felipe Albuquerque would make the decisive move on the resumption of the race, mirroring the first lap pass for the lead.

Into the final 2 hours of the race and it was still unclear as to which leading DPi car would come out on top. With the threat of weather as well to throw into the mix, the final third of the race looked to be set up for a tantilising finish.

The calm green flag running briefly burst into action as with1 hr 43mins left there was a fire in the pitlane involving the #30 LMP3 car that was parked behind the second-placed LMP2 #20 Oreca. There was no caution thrown but the event did happen around the time of pit stop work happening. Happily, everyone was fine, and the fire was quickly put out.

With an hour and a half to go, the #39 GTD Lamborghini was taken out of the race as it was getting out of the way of the LMP2 battle. The LMP2 cars made contact after leaning on each other and subsequently collected the Lamborghini which was an innocent party in the event.

At 1 hour 25 mins to go the Red Flag was thrown due to incoming weather. Just before the flag was thrown, the #60 pitted and came out ahead of the WTR Acura. This put it in prime position as there was still uncertainty as to whether the #10 had to pit again.

The race resumed under yellow with 30 minutes to go.

Cars that were not quite able to make it to the finish without stopping took their pit stops under the Full Course Yellow to lose as little time as possible. The #10 didn’t however. A big move happened in the LMP2 battle as the Dragonspeed car had to pit with what was possibly a drive time issue.

With 21 minutes to the green flag was thrown and the lead changed in a copy move of the turn one lap one pass at the bus stop chicane. The Wayne Taylor Racing car moved ahead of Tom Blomqvist with Bourdais doing his best to challenge.

Albuquerque, Blomqvist and Bourdais formed a 3-way fight for the lead that scythed through the other classes lap after lap as the time ticked down. With 8m 30s to go Alex Lynn joined the fight as a tense fight played out before us.

Disaster for the leading Risi Competizione Ferrari as they had to make a splash for fuel with 4 minutes to go. Daniel Serra had been comfortably leading but it wasn’t to be for the Risi driver. This put Mathieu Jaminet in the lead who then had to pit themselves on the subsequent lap, this gave John Edwards the lead in the pole-sitting BMW in GTD Pro.

Despite pressure from the moment they re-took the lead the Wayne Taylor Racing Acura took the victory from the Meyer Shank Racing and the #01 Cadillac of Chip Ganassi.

In LMP2 it was Scott Huffaker from Louis Deletraz and Giedo Van Der Garde. Scott beat Deletraz at the line by 0.107s after a fantastic fight culminated in a side-by-side drag race.

The late pit stops meant that John Edwards took the #25 BMW M4 across the line in first followed by Ross Gunn in the Heart Racing Aston Martin. Daniel Serra would be able to secure third after a late fuel stop.

Finally, in GTD Philip Ellis won with a gap of 3s to the #27 Aston Martin. Roman De Angelis making it a pair of second places for Heart Racing. Ollie Millroy rounds out the podium in the Optimum Motorsport Mclaren.