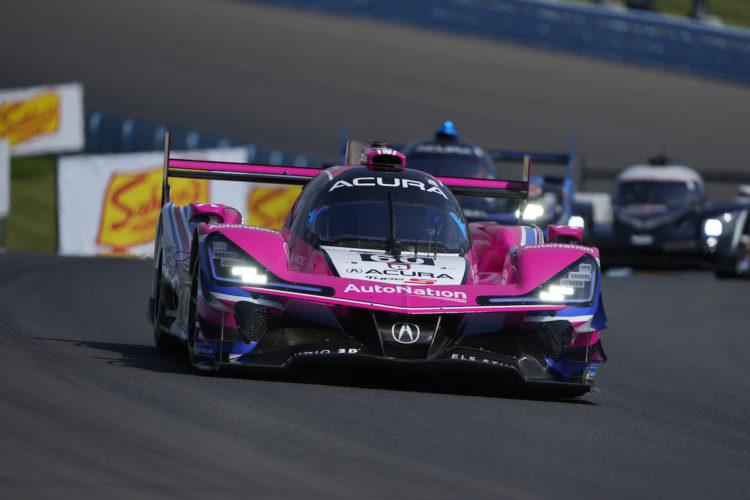 Oliver Jarvis leads the Shalen 6 Hour’s at the Glen after the race’s longest period of green flag running. The #60 Acura is duelling with the #10 Wayne Taylor machine which is on an alternate strategy, looking to gain the upper hand as we get into the final third of the race.

The race got back underway just past the 2-hour mark and Earl Bamber made his move on the #5 of Tristian Vautier to move into fourth place.

The leading Wayne Taylor Racing Acura made its pit stop at the 2hr 15 mark, surrendering the lead to the Meyer Shank Racing team. WTR changed driver to Ricky Taylor as Blomqvist has 4 Cadillacs behind him within 11s.

Not long after Sebastien Bourdais starts to pressure Blomqvist with the second Ganassi car of Earl Bamber catching them both. A look down the inside of the leader didn’t come off into the bus stop but Bourdais continued to pressure the Acura.

Fifteen minutes after the WTR pit stop the leading Meyer Shank Racing car came in, changed drivers to Oliver Jarvis, and would come out nearly three seconds behind Ricky Taylor. Renger Van der Zande would be directly behind the MSR Acura when it re-joined the track but with a gap of 1.5s.

The #32 Mercedes in GTD would incur some damage to the front right of the car which would be big as they are the points leader in class. Marvin Dienst led the GTD class with one pit stop less than second-place Maxime Martin in the #27 Aston Martin. In the Pro class, Ben Barnicoat was still leading but second place was occupied by the #3 Corvette despite starting 37th overall and 7th in class. Fan favourite Risi Competizione was holding third with Davide Rigon at the wheel.

Unfortunately for the #3 Corvette, the good start to the race would hit an issue as they received a drive-through penalty for multiple track limits violations. The car ran off track in defence of his position from the chasing Ferrari which finally incurred the wrath of the stewards.

There has been a tight scrap in LMP2 with Anders Fjordbach leading but Juan Pablo Montoya, Mikkel Jensen and Giedo Van Der Garde chasing him down. The 4 were only separated by 2 seconds and would continue to pressure each other.

Despite two incidents involving Ferraris, the race started to get into a rhythm with a good amount of green flag running. This allowed Montoya to pass Fjordbach for the lead in LMP2 despite the car missing a wheel earlier in the race. When it came to the next set of stops though, the #20 Oreca jumped the Dragonspeed machine to re-take the lead of the class.

With this period being the longest amount of green flag running, it became a matter of hitting the strategy points. The Wayne Taylor Racing car ran roughly 10 laps out of sync with the rest of the field whereas their main rivals at Meyer Shank were on the more conventional pit stop times. The only other bit of main action going on was the LMP2 lead battle between Sebastien Montoya and Louis Deletraz. The Dragonspeed machine had got back ahead although was now robustly defending from behind.

As the clock struck two hours to go, Oliver Jarvis leads for Meyer Shank Racing followed by Albuquerque and Renger Van der Zande in DPi. In LMP2 Fjordbach got back ahead of Montoya with Dylan Murry trailing the leader by five seconds. LMP3 has the #74 Ligier of Felipe Fraga out front, with Garett Grist and Colin Braun rounding out the podium spots.

Heading into GTD Pro, Augusto Farfus leads in his BMW M4 GT3 followed by Daniel Serra and Kyle Kirkwood. In the GTD class, Ollie Millroy is being chased by Bryan Sellers with Philip Ellis in third.