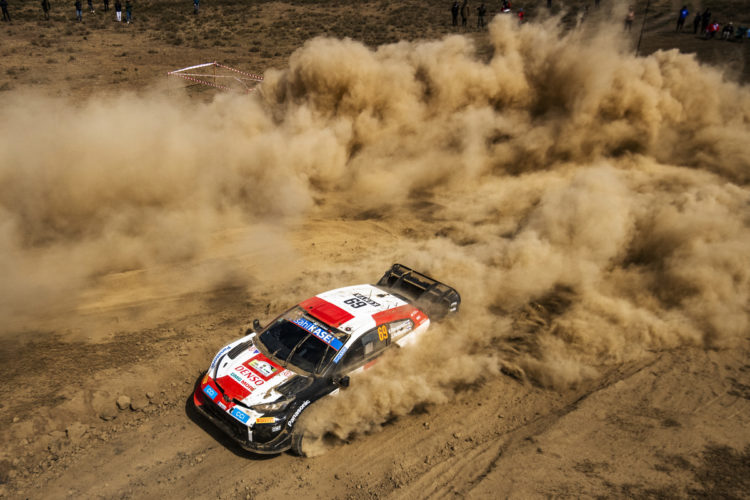 Despite languishing in 11th place after the Thursday night curtain-raiser, the Finn was able to power back into contention. On the final stage of the day, Ogier had to do a wheel change which meant Rovanpera left the day with a 22.4s to Elfyn Evans who had suffered a puncture earlier in an earlier test.

Round 6 of the FIA WRC Championship began on Thursday with the curtain-raising Super Special Kasarani stage. The winner of the last Safari Rally and returning Toyota driver, Sebastien Ogier, got off to a flyer by taking the opening stage win with five-tenths of a second to the runner-up, Thierry Neuville. The Belgian’s Hyundai teammate, Ott Tanak, rounded out the podium just another half a second back.

The big news going into the main opening day was Rovanpera’s puncture that left him 11th after the Super Special stage on Thursday. Rovanpera would start to rectify that however as, by stage 4, he had pushed into the podium spots. This was aided by the roads and sand absolutely punishing the crews. At least half were affected with some sort of trouble over the day.

Two of those affected were Ogier and Evans. Ogier was heading the pack for most of the day apart from one stage, where Evans would briefly lead, but it wasn’t to be as on the final run, the Frenchman would need a wheel change on the stage and lost chunks of time. Evan’s brief time in the lead was cut short due to a puncture in the rear of the car but was able to make up the time to put himself into second place.

2.9s back was Ott Tanak, although it wasn’t plain sailing as the gear lever of his Hyundai i20 N snapped during the first stage. The Estonian carried out a makeshift repair, using the car’s spare wheel brace as a temporary shifter before going on to claim a brace of top-three times.

Takamoto Katsuta had been running strongly throughout the stage and was second going into the final test of the day. Unfortunately, the Japanese driver lost time passing Craig Breen’s Ford Puma, which had retired due to suspension damage and finished 1.3s behind Tanak’s Hyundai.

Neuville finishes the day fifth with a minute being the gap. The Belgian lost time when his car lost power after collecting too much sand as well as general driveability issues. Ogier ended the day sixth after his issues.

It wasn’t a good day for Ford, Gus Greensmith was the only Puma to finish the day, however, he was almost fifteen minutes off the pace due to having to make repairs. At one point Greensmith was driving on three wheels such was the extent of the damage. Sébastien Loeb’s Puma stopped with engine troubles on the way back to midday service and Adrien Fourmaux’s similar car also bowed out with a transmission-related failure.

UPDATE: After an investigation by the rally stewards, it was agreed that Takamoto Katsuta was hindered by Breen’s car and thus will receive an amended stage time. This means that Katsuta now moves back up to second place, with Evans and Tanak moving down one spot.