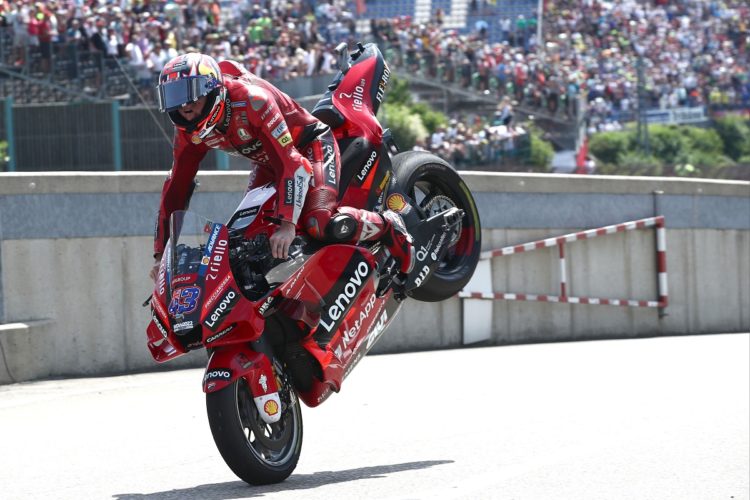 Jack Miller enthused that he had “great fun” fighting back through the field following an early long-lap penalty in the German Grand Prix en-route to scoring a podium finish.

The factory Ducati rider was forced to drop from running fourth in the early stages of the Sachsenring sprint to seventh after being landed with a long-lap punishment for crashing under yellow flags during FP4 on Saturday afternoon, leaving him with a tough task to try and recover the time he had lost.

The Aussie was in simmering form in the high temperatures felt at the German venue and had recovered to the top five prior to mid-distance, before then getting stuck into the tussle for the final rostrum spot in the closing stages with Aprilia duo Aleix Espargaro and Maverick Vinales.

With Vinales soon dropping out with a jammed ride-height device, Miller diced with Espargaro as the Spaniard struggled with a severe vibration, a fight he eventually won after Espargaro ran wide at Turn 1 with just a few circulations remaining.

Despite the three-time premier class race winner describing the German GP as “the most physical race I’ve done in MotoGP”, he admitted he was having “great fun” fighting through the top ten having found a “really good feeling” with his Ducati.

“It’s bloody hot out there, I think this was the most physical race I’ve done in MotoGP simply because of the temperature and the layout of the track, there’s no rest and you’re constantly working,” said Miller.

“Having to spend the whole race chasing others didn’t help having to cop the heat from the other bikes, but it was a fun race and I had a lot of confidence and really good feeling with the bike all weekend since we rolled out in FP1.

“I could show that today and do some really good overtaking, even when I sent it in a bit deep a couple of times on Aleix (Espargaro) I knew where my limits were and knew what the bike was doing, and whether I could stop it or not.

“It’s great fun when you can ride like that and attack the corners like I could, so it was an awesome race.”

Miller revealed that he very nearly lost the front of his Desmosedici while navigating the long-lap loop due to running over the gravel left on the tarmac as a result of Joan Mir’s earlier crash at the bend, describing the moment he turned in as “sketchy.”

“The long-lap penalty was a bit sketchy, but the rest was alright,” continued Miller.

“I felt the front go (during long-lap), I saw the rocks (gravel) go under the front tyre and felt it go from under me for a little bit, but luckily I was able to pick it back up and get out without losing too much time, which was crucial for today’s result.

“Those last two (races) I haven’t felt like myself riding the bike, I’ve had no confidence with the front and it just seemed to be the places where we were struggling with grip, and that was very low out there today.

“The set-up changes we made in the Monday test have made me way more confident and more like myself again, I’m really looking forward to the races coming up.”