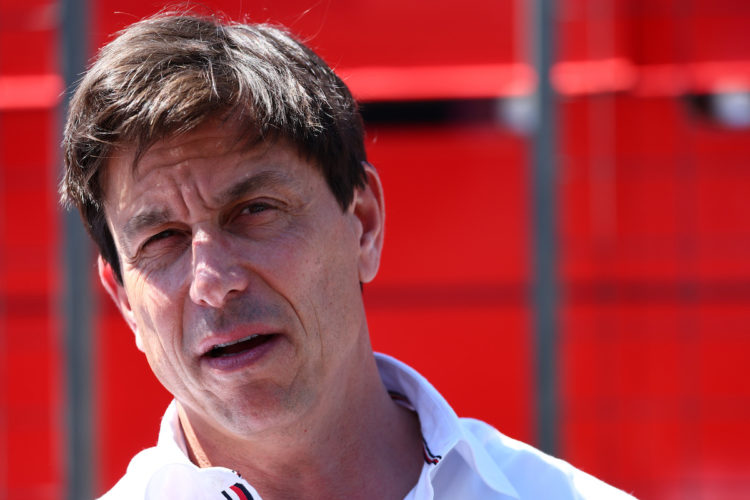 Mercedes team boss Toto Wolff has hit out at rival Formula 1 teams over their opinion on the ongoing bouncing issue, labelling the situation as “pitiful”.

Prior to the race weekend in Montreal, the FIA released a Technical Directive that aimed to decrease the severity of how much the cars bounced at high speed.

At the recent Azerbaijan Grand Prix, Mercedes’ Lewis Hamilton and George Russell complained throughout the weekend of back aches, with the team calling on the FIA to intervene and solve the problem.

However, other drivers and Team Principals have stated that those who are badly affected by bouncing can simply raise their ride height to increase driver comfort at the cost of performance.

Speaking after qualifying in Canada, Wolff accused other Team Principals of manipulation to maintain an advantage in the pecking order.

“This is a sport where you’re trying to keep a competitive advantage or gain it,” Wolff said. “But this situation has clearly gone too far.

“All drivers, at least one in every team have said that they were in pain after Baku, that they had difficulty in keeping the car on track or blurred vision.

“And Team Principals trying to manipulate what is being said in order to keep the competitive advantage and trying to play political games when the FIA tries to come up with a quick solution to at least put the cars in a better position is disingenuous.

“All of the cars because I’m not only talking about the Mercedes, all of the cars suffered in some way or other in Baku, and still do it here.

“The cars are too stiff the cars, bounce whatever you want to call it. As a matter of fact, this is a joint problem we are having in Formula 1.

“It’s a design issue and not a fundamental design issue that needs to be solved. We have long-term effects that we can’t even judge.

“At any time this is a safety risk and then coming up with little manipulations in the background or Chinese whispers or briefing the drivers is just pitiful.”

Wolff has denied that Mercedes is calling for changes simply because its pace is down on front-runners Red Bull and Ferrari this season.

“Of course, people will question whether my position is sincere or not,” he stated. “That’s why I’m saying it’s not only our problem.

“If a Red Bull driver says you reach 300 kilometres an hour, which is when the issue comes up, and with these problems, you can even lose your vision when braking or not being able to position the car properly, said Perez.

“This is a design issue of ground effect cars that needs to be tackled before we have a situation, whatever it is, and it is not just by putting the cars up but because the cars putting the cars up doesn’t solve the stiffness of the inherent aerodynamic characteristics.”