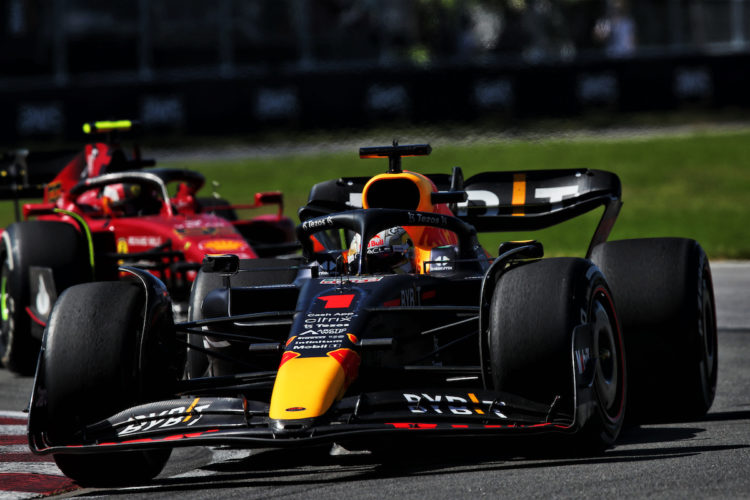 Max Verstappen has taken his sixth grand prix win of the 2022 Formula 1 season, fending off Ferrari’s Carlos Sainz in the latter stages.

Verstappen led most of the race after starting from pole position, but did relinquish the lead on a couple of occasions through strategy.

The Dutchman made his first pit stop on lap eight under a Virtual Safety Car, with Sainz moving to the head of the pack for a short time before he made his own stop.

Sainz was then able to benefit later in the race, as he made his second stop under a Safety Car following a crash for Yuki Tsunoda.

With the final 15 laps running under a green flag, Sainz hounded the rear of the reigning World Champion, but couldn’t move ahead of Verstappen.

The Red Bull took the chequered flag under a second ahead of Sainz, with the Ferrari driver securing his fifth podium result of the year.

Lewis Hamilton claimed just his second top-three result of the season in third place, marking a strong recovery for the Mercedes driver after a difficult start to the weekend in Montreal.

George Russell was fourth in the second Mercedes, while Charles Leclerc recovered from the back of the grid to fifth place, limiting the damage in the title fight.

The second Red Bull car of Sergio Perez failed to finish the race, as he suffered a mechanical issue early on.

The Alpine drivers of Esteban Ocon and Fernando Alonso came home in sixth and seventh respectively, with Alonso dropping backwards after starting from the front row and going deep into the race on his first stint.

Alfa Romeo picked up a double points finish as Valtteri Bottas headed team-mate Zhou Guanyu across the line, while Lance Stroll progressed through his home track to take the final point on offer.

Joining Perez and Tsunoda on the sidelines was Mick Schumacher, who was also hit with a car issue in the early stages.

Both he and team-mate Kevin Magnussen looked to be on for point-paying positions, however Magnussen was forced to pit after picking up front wing damage on the opening lap of the race.

F1 will return in two weeks’ time, with the British Grand Prix hosting the 10th round of the season.