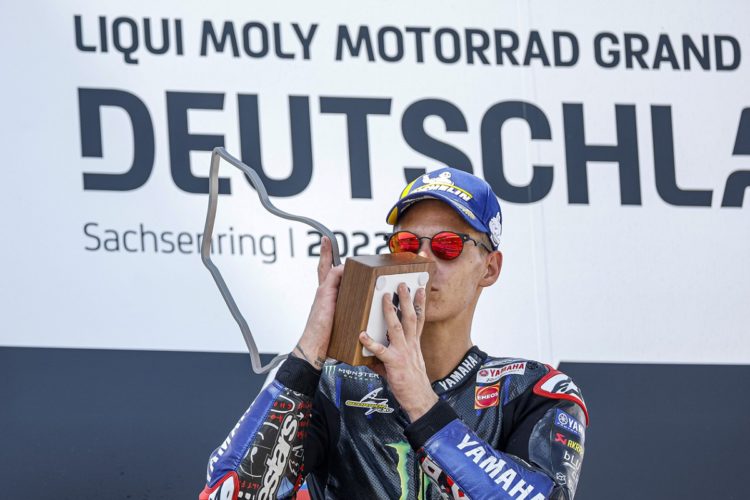 Fabio Quartararo says his path to victory in the German Grand Prix was made all the more tricky after revealing he slept only “eight hours” in the three days prior.

The reigning MotoGP world champion took control of the Sachsenring sprint from the very first corner after beating pole-man Francesco Bagnaia off the line, the Yamaha man fending off a string attack from the Ducati pilot across the opening couple of circulations.

His task was made slightly easier after Bagnaia crashed on the exit of Turn 1 on lap four, leaving Quartararo with a 1.2 second advantage over Pramac Ducati’s Johann Zarco, though his countryman was on the harder compound rear tyre that theoretically was faster in  the closing stanza of the encounter.

Zarco’s charge ultimately failed to come to pass though, with Quartararo conversely extending his lead out to 4.9 seconds by the time he took the chequered flag after 30 laps at the simmering venue.

While enthusing that he was “having fun” pulling away from the field, he also admitted his job was made harder by the fact he had managed to get a combined “eight hours” of sleep in the few days prior to the vent after feeling unwell.

“It was really difficult because when you’ve already made a race like Barcelona that is 24 laps it’s so long, but 30 laps is like a nightmare and to be honest it was like the longest race of my career,” explained Quartararo while speaking to BT Sport after the race.

“I was still enjoying though and I could see the gap increasing a little bit and was having fun, it was great to have my first victory here at the Sachsenring.

“The decision (to use medium rear and not hard rear tyre) was because all weekend I felt better with the medium and I felt the drop between the hard and the medium was more or less similar, but I felt stronger with the medium so we decided to go with that one.

“I’m feeling tired to be honest because over the last three days I’ve only slept for around eight hours in total, so it’s great to finish the weekend, have a rest for Assen and of course enjoy the moment.”

Quartararo’s second straight success means he now possesses a 34 point advantage over Aprilia’s Aleix Espargaro – who took fourth in the German GP – as the season reaches its half-way mark, with pre-season title favourite Bagnaia now faced with a 91 marker deficit to his 2021 rival if he is to challenge for a maiden premier class title.