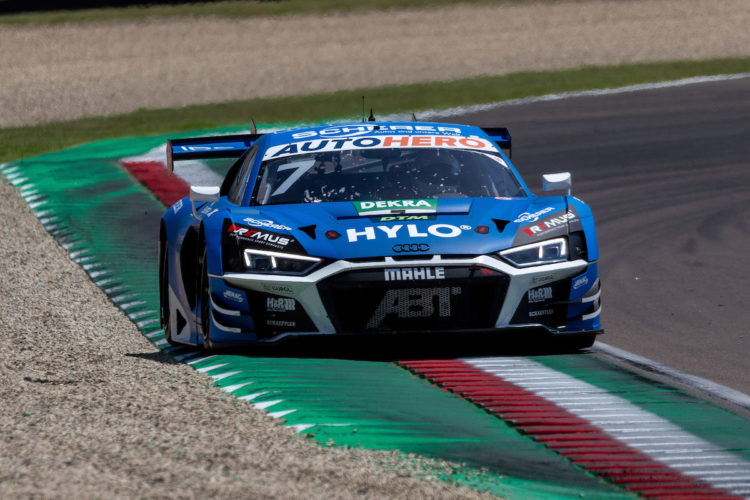 Ricardo Feller has scored his first ever DTM pole for Team Abt Sportsline Audi, for the second race of the weekend at Imola.

The Swiss’s lap was over one and half tenths ahead of Red Bull AlphaTauri AF Corse’s Felipe Fraga, but that’s still Fraga’s first ever DTM front row start.

With both the Audis and Lamborghinis receiving 25kg of extra weight in overnight balance of performance adjustments, the sharp end of the field in qualifying looked starkly different compared to yesterday. The Porsches have also received 5kg of weight, which will affect the three 911 GT3Rs in the field.

Third in qualifying was Marco Wittmann in the Walkenhorst BMW, six hundredths off Fraga. Maro Engel was fourth for Mercedes-AMG GruppeM, while Clemens Schmid, fourth yesterday for GRT Lamborghini, qualified fifth today despite the extra weight.

Nick Cassidy was sixth in the sister Red Bull AlphaTauri AF Corse Ferrari, just one thousandth of a second off Schmid.

Luca Stolz qualified seventh in the Mercedes-AMG HRT, while yesterday’s polesitter and race winner, Rene Rast, took eighth. The German was on the front row until late on in the session, when a flurry lof fast laps demoted him down to eighth.