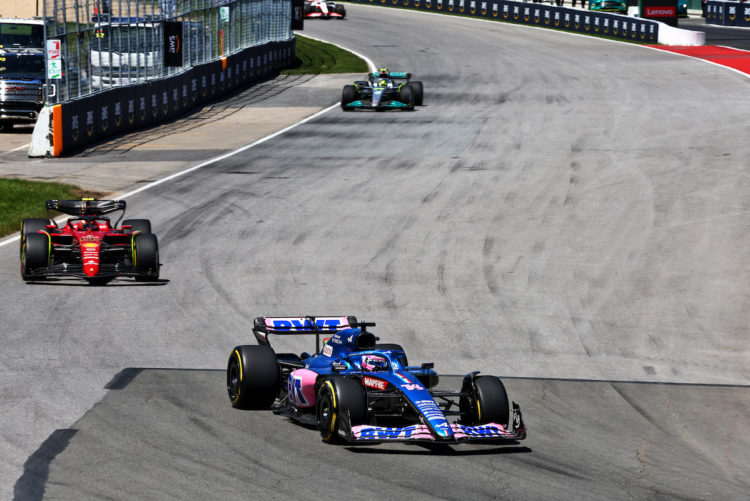 Fernando Alonso believes he was denied the chance to fight for a podium result in Montreal due to a Power Unit problem.

Alonso started the race from second on the grid, but soon found himself in third place after being overtaken by Ferrari’s Carlos Sainz on lap three.

The Alpine driver then went deep into the race on his Medium tyres, and found himself out of the top three on lap 23 when Lewis Hamilton moved ahead of him, after Alonso opted not to pit under a pair of Virtual Safety Cars.

Alonso went on to cross the line in seventh, dropping a further position to Ferrari’s Charles Leclerc, who capitalised on a late-race Safety Car.

However, according to the double World Champion, an issue with his engine that began early in the race hindered his opportunity to claim a top-three result.

“We had an engine problem on lap 20 where we cut the energy very early on the straights, as soon as we exited the corners,” Alonso said.

“We tried to fix it but it didn’t work. Luckily we didn’t retire the car and we still scored a few points, but until that point I think we were fighting for the podium at the beginning of the race.

“I felt strong compared to Hamilton, we just didn’t have the pace of [Max] Verstappen and Sainz. I was OK to control Hamilton in the Mercedes.

“Then the Virtual Safety Cars, lucky or unlucky, that could change the race, OK. But we could still maybe be fighting for P3, P4.

“But then when the engine problem came, it was just trying to survive, trying to get the DRS, driving kamikaze in the corners before the detection because the DRS was my only safety on the straights after that.”

Alonso believes the problem was so severe that he was losing up to a second per lap on the straights around the Circuit Gilles Villeneuve.

“I could not pass [team-mate Esteban Ocon at the end], but it was very frustrating, my car was flying this weekend,” he said.

“I had a one second deficit on the straights and still I was quicker on the race. It’s unbelievable to finish P7.

“It’s another reliability issue on car 14 only. That’s disappointing. I’m here trying to be better than sixth and seventh.

“If we didn’t finish on the podium or in P4, it’s because we had a reliability issue on car 14.

“Unlucky maybe with the Virtual Safety Cars but the luck, you can’t control. Reliability on car 14 should be a little better.”