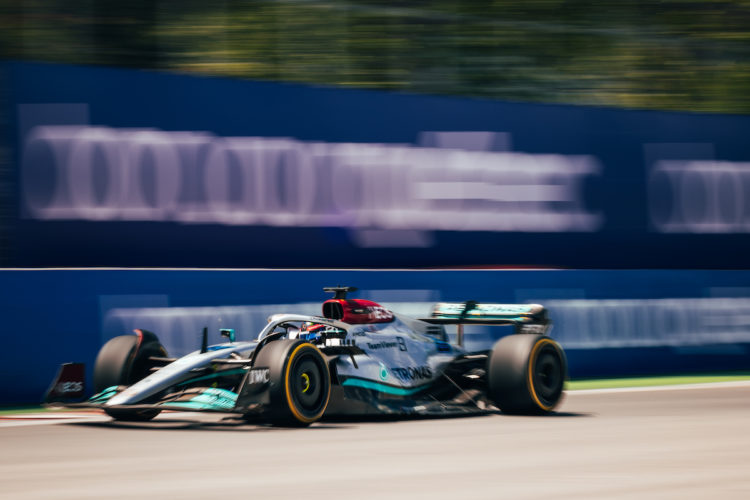 George Russell says the ride around the Montreal Formula 1 circuit is “just brutal” due to the stiffness of the 2022 cars.

The challengers for this year are much stiffer compared to their predecessors following the introduction of new technical regulations.

It means that bumps and driving over kerbs have a more extreme effect on the driver’s body, with several drivers complaining over its severity.

As Montreal’s track features a number of bumps, as well as drivers needing to mount the kerbs in order to extract lap time, Russell says the opening day of practice on Friday made for an uncomfortable drive.

“It’s still very bumpy to be honest,” he said. “Just the stiffness of these cars is just brutal.

“I think in Baku it was a combination of issues between the porpoising, the bottoming and the stiffness – here you really feel the stiffness as we sort of did in Monaco, and it’s something we’re trying to tackle.

“I definitely can’t run them [the kerbs] as much as we used to. It’s bumping around everywhere around this circuit.

“We’ve got this car as soft as we can but there’s something in there that’s not allowing us to do that.

“I know that is a bit of a known thing with these new 18-inch tyres and this new iteration of cars but clearly we need to make some improvements.”

Mercedes has endured a difficult 2022 campaign so far, competing off the pace it enjoyed throughout the turbo-hybrid era that began in 2014.

Russell ended the second practice session in Canada in seventh place, admitting that once again the team is a long way off rivals Red Bull and Ferrari.

“Ultimately our performance wasn’t where we want it to be,” he said.

“We’re quite a long way off the pace compared to the front two teams, but also there’s a couple of guys – Fernando, Sebastian – who look very strong as well so we’ve got work to do.”

“In FP2 that was probably the biggest deviation in set-up Lewis [Hamilton] and I have had all season, we went in two very drastically different directions.

“We’ll probably be able to find the happy medium between the two. We’re going to be working hard, we just need to make sure we qualify ahead of the midfield.

“I think we’ve got a race car that will put us in that third-best team position spot, but obviously if we qualify a little bit out of position it may be tricky.”