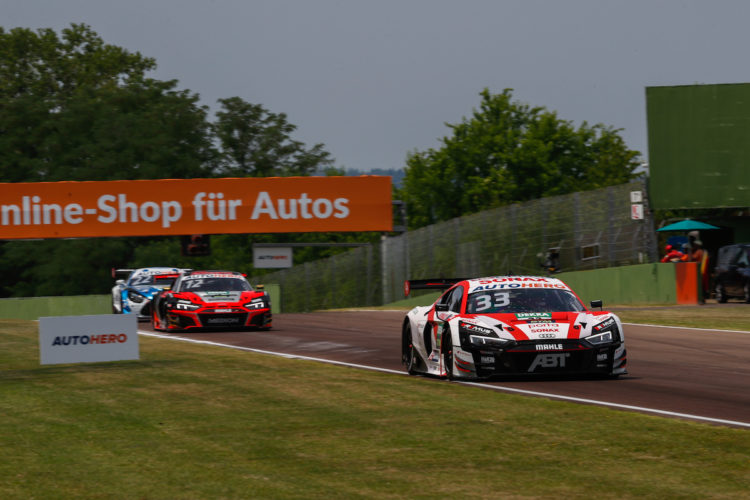 Rene Rast won the first DTM of the weekend at Imola, winning from pole and never really being challenged as the Team Abt Audi driver drove to the win.

Nico Muller finished second after a relatively lonely race in the Team Rosberg Audi, outpacing those behind him but not quite being able to keep up with Rast in front.

Mirko Bortolotti finished third for GRT Lamborghini, after starting 16th. He led much of the race as he pitted late, coming out 8th — already a decent result from 16th — and then roared through the field to finish third. He passed Kus Team Bernhard’s Thomas Preinning, who ran third before Bortolotti made his way through at Tosa, Abt’s Kelvin van der Linde, his teammate Clemens Schmid, and Walkenhorst BMW’s Marco Wittmann, who finished fourth through to eighth.

By finishing ahead of championship leader Sheldon van der Linde, who finished 8th, Bortolotti moves just three points behind the South African in the championship standings. However, for tomorrow’s race, S. van der Linde will not have the success ballast he carried today for winning last time out at the Lausitzring, while Bortolottio will as he finished third today.

In ninth was Dennis Olsen in the SSR Performance Porsche. Maro Engel finished tenth in the Mercedes-AMG GruppeM car.

With S. van der Linde and Bortolotti separated by just three points at the top of the championship, Muller is third, 12 points away from the championship lead. He will also carry success ballast tomorrow as a result of finishing second today.