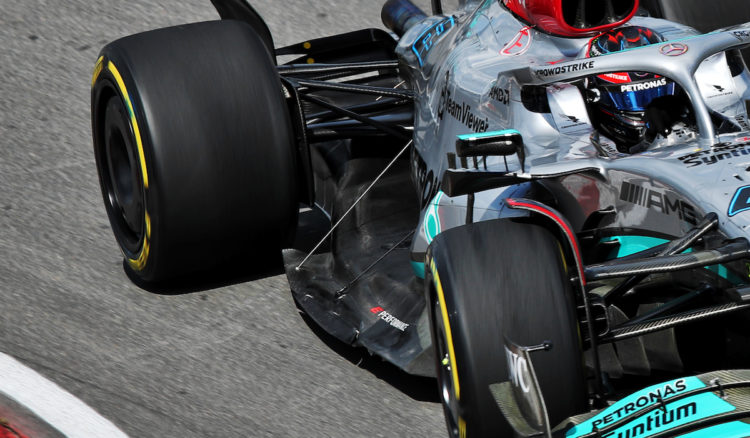 Mercedes have dropped a second floor stay on the floor of their W13 ahead of qualifying for the Canadian Grand Prix, following protest threats from rival teams.

The FIA issued a technical directive ahead of the Canadian GP weekend in an effort to combat the porpoising phenomenon, citing health and safety reasons following a number of complaints by drivers that the bouncing was causing them severe pain.

Mercedes, with its drivers Lewis Hamilton and George Russell having been at the centre of calls for the FIA to step in, reacted almost immediately to the technical directive by adding a second floor stay in an effort to add additional rigidity to combat the bouncing.

However, other teams have threatened to protest Mercedes’ W13 had the stay remained in place for qualifying and the race, because it isn’t permitted under the technical regulations, which haven’t yet been updated in light of the technical directive (TD).

The FIA has the power to amend the regulations mid-season, which it often does with a TD. However the normal process involves amending the technical regulations at the same time, which wasn’t done, therefore there are questions as to whether the permitted second stay as per the TD would be legal.

To avoid any protest threat, Mercedes have dropped the second stay – the team ran this during practice with both Hamilton and Russell, but he reported little to no difference in the porpoising.

The FIA will likely amend the regulations ahead of the British Grand Prix in two weeks time, with a World Motor Sport Council meeting scheduled to take place ahead of the race weekend.