Bagnaia storms to Sachsenring pole ahead of Quartararo 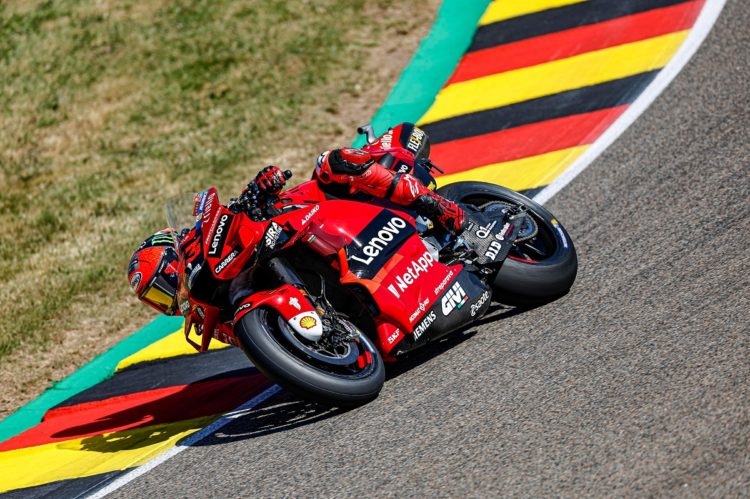 Francesco Bagnaia fired to his third pole of the 2022 MotoGP season at the Sachsenring as Fabio Quartararo managed to salvage a front-row spot in second.

The Italian stamped his authority on the session from the start as he banged in a 1:20.098s to lead the way at the conclusion of the opening runs as Ducati again looked to be the manufacturer to beat, team-mate Jack Miller and Pramac’s Jorge Martin slotting in just behind.

Keen to miss any potential yellow flags that could fly during the flurry of the final few minutes, Bagnaia headed out early to complete his final two push efforts – the 2021 vice-champion finding improvements on both to ultimately settle on a 1:19.931s before heading back to the garage to observe whether his rivals could pick up the gauntlet he had thrown down.

Several riders managed to lap underneath the factory Ducati ace in the first split, though his mighty pace through the second and third sectors ultimately kept him atop the standings until the very end – giving him his first pole since Le Mans.

Behind him series leader Quartararo managed to shake off his rather average practice form to snatch away second at the death from Pramac’s Johann Zarco, the Yamaha rider lapping just 0.076s adrift of Bagnaia as he looks to try and score a second straight success on Sunday.

Zarco held onto third as the last man to lap within a tenth-of-a-second of Bagnaia, the Frenchman just edging Aprilia’s Aleix Espargaro for the final spot on the front row.

Fabio Di Gianantonio meanwhile continued his recent formidable Saturday speed to complete the top five for Gresini Ducati having escaped Q1, the Italian having outperformed his highly-rated team-mate Enea Bastianini – who ended up only 17th after being knocked out in the opening segment of qualifying – all weekend so far.

Miller was eventually shuffled back to sixth on the sister factory Ducati ahead of VR46’s Luca Marini and Martin, while Maverick Vinales took ninth on the second Aprilia.

Takaaki Nakagami rounded off the top ten on his LCR Honda having crashed once again at Turn 1 towards the end of the session, while Marco Bezzecchi and Joan Mir on the sole Suzuki – Alex Rins having elected to miss the remainder of the weekend after suffering with his wrist injury during FP3 – completed the 12 Q2 runners.

Pol Espargaro meanwhile missed out on the pole shootout by just 0.004s to Bezzecchi having struggled with suspected broken ribs throughout the weekend so far, the Spaniard just clear of factory KTM duo Miguel Oliveira and Brad Binder.

Home hero Stefan Bradl will start 18th for Honda in Sunday’s German Grand Prix just behind Bastianini and ahead of the continuously struggling Yamaha duo Franco Morbidelli and RNF Racing’s Andrea Dovizioso, the latter just getting the better of his fellow M1 pilot for 19th.