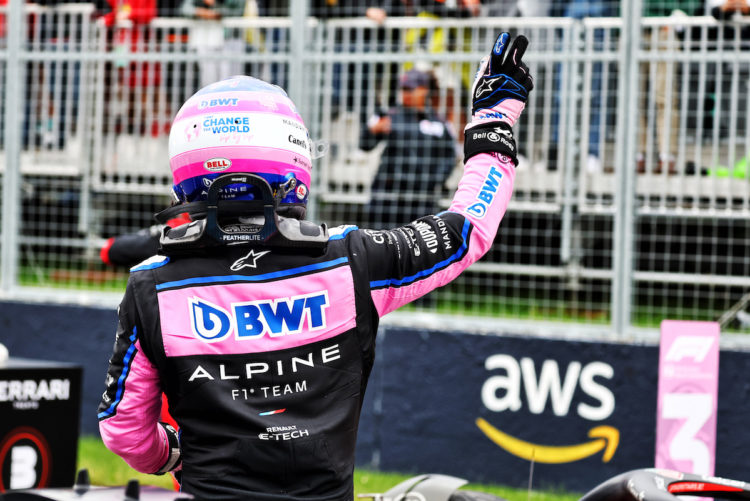 Fernando Alonso says he aims to lead the Canadian Grand Prix on the opening lap after securing a second-place starting position.

The Alpine driver qualified on the front row of the grid for the first time since the 2012 German Grand Prix, when he competed for Ferrari.

Alonso ended Saturday’s damp session in Montreal over six-tenths of a second down on Verstappen, who took pole position for Red Bull.

Alpine’s pace looked strong throughout Saturday in wet conditions, with Alonso admitting that he thought the team’s pace would slip away as the session went on.

“We were P3 in FP3 this morning so it seemed like we were okay in wet conditions,” Alonso said.

“But it was not really wet from Q2 onwards, it was nearly dry in the end. So in a way I was thinking ‘why could it not be a little bit wetter and rain a little bit now’.

“Maybe that was the best thing for us but eventually at the end it was not necessary and we were also okay in these semi-dry conditions.

“The car was also fast yesterday on dry, fast on the long run pace as well, and fast in the wet conditions this morning and now. So far it has been a very competitive weekend for us. ”

Alonso admits that pole position was never a realistic target for him, extending his F1 pole drought further.

“They [Red Bull] are in a different league for sure and it was not in our wildest dreams to be on pole position.

“So we will take the first row for sure, that is maybe better than any expectation. Let’s see. I think we are still missing a little bit of downforce, a little bit of total grip in the car.

“We have been working a lot on the tyre degradation, a lot of set-up changes, so I think we are better prepared than any other race so far this year. So let’s finish the job tomorrow.”

When asked what his goals are for the race, Alonso replied: “The goal is to lead the race in Lap 1, so Turn 1 maximum attack!

“And then after that, they can go and they can fight but it would be sweet to lead the race.”