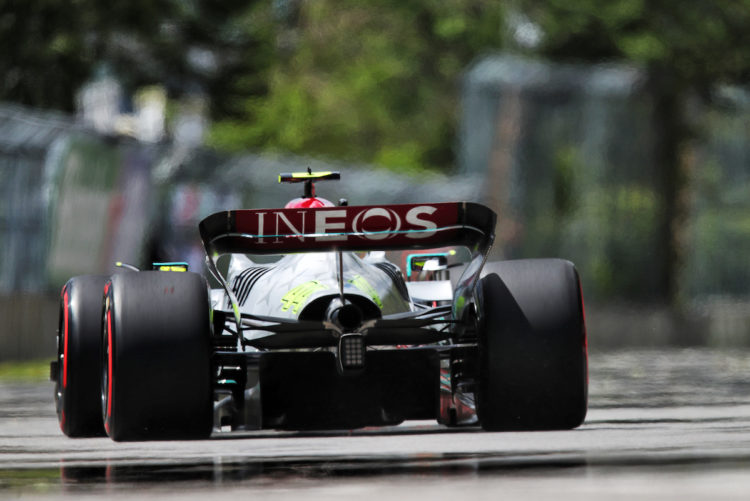 Lewis Hamilton says that Mercedes is unable to raise its car any higher to decrease bouncing due to rear suspension limitations.

Last time out at the Azerbaijan Grand Prix, Mercedes suffered from severe bouncing throughout the weekend, resulting in back pain for both Hamilton and team-mate George Russell.

The team has had porpoising since the start of the year, however its most recent issue is due to the car’s ride height.

Teams are running their cars as close to the ground as possible this year to produce downforce, with heavy bouncing being a side-effect of the new technical regulations.

Several drivers called for measures to be taken, with the FIA sending out a Technical Directive before the Canadian Grand Prix weekend.

Max Verstappen and Lando Norris have argued that affected teams should raise their ride heights to decrease the bouncing’s severity.

However, Hamilton says that it’s not an option that exists for Mercedes.

“In the last race and previous races, we have raised the car, and you still have bouncing,” Hamilton said.

“Porpoising, it’s more about the flow structure underneath the car, so we run the car very high most [of the] season.

“It’s not until Barcelona that we started to be able to get it a little bit lower and we had no bouncing for the first time in Barcelona, except for in the high-speed corners.

“Then it appeared again in Monaco, in Baku so we had to raise the car again. Even when we raised the car this thing still bounces.

“We can’t go any higher, actually. We’re limited by the rear suspension now.

“So we do lose performance naturally when you do go higher but this porpoising is caused by the disrupted flow underneath the car.”

Hamilton asserted that safety should be the highest priority going forward, and hopes to see the bouncing eliminated completely rather than being controlled.

“I think safety is the most important thing and I think there’s at least one driver in every team who has spoken on it,” he said.

“It’s positive that the FIA are working towards improving it because we have this car for the next few years.

“So it’s not about coping with the bouncing for the next four years, it’s about completely getting rid of it, fixing it, so that future drivers, all of us, don’t have back problems moving forward.”