Norris: Mercedes not willing to sacrifice pace to stop bouncing 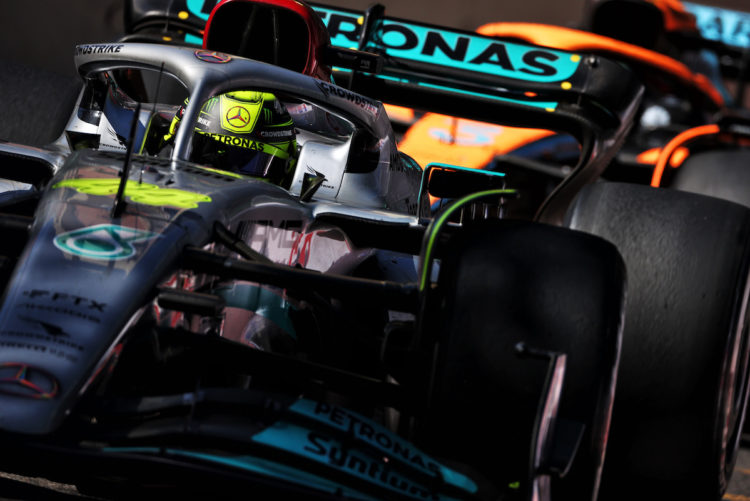 Lando Norris says that Mercedes is not willing to sacrifice performance in a bid to solve the bouncing issue its car is suffering from.

Both Lewis Hamilton and George Russell noted that they were in pain throughout the Azerbaijan Grand Prix weekend, with Hamilton stating it was the most painful race he’s endured in his career.

Mercedes team boss Toto Wolff even suggested that Hamilton could miss this weekend’s race in Canada as a result.

The team suffered severe porpoising in the early stages of the 2022 campaign, but introduced upgrades in Barcelona in a bid to decrease its impact.

The current issue for the reigning Constructors’ Champions appears to stem from its car running close to the ground, which is being done to create downforce through the ground effect.

Speaking to F1TV, McLaren’s Norris says he has no complaints about bouncing, stating that Mercedes can simply raise the ride height to solve its issue.

“I’m loving it at the minute, I’m not complaining,” Norris said. “We have some porpoising and some bouncing, but it’s what you have to deal with.

“We think where we’re at is the correct amount. I’m sure the Mercedes could have a much stiffer floor and raise the ride height and it’ll be much nicer for them.

“But they obviously just don’t want to lose performance. I don’t think it’s anything to complain about, just people need to find ways of fixing it themselves.”

The issue is expected to carry over to Canada this weekend, with the Montreal track being quite bumpy, while drivers often take kerbs to maximise lap time.

Mercedes’ reserve driver Stoffel Vandoorne is expecting the bouncing to continue for the team in Canada.

“I fear it’s going to be very difficult to find a solution for next weekend,” he said. “They brought an update to Barcelona which really improved the car a lot. We saw some really good race pace there from Lewis.

“But then Monaco is a very particular track. Here [Baku] is quite a particular circuit as well. The porpoising seemed to be back, and probably one of the worst out there.

“It’s not a comfortable ride for Lewis and George. But at the same time, they know if we raise the car and make it feel more comfortable, we’re just giving up performance.

“It’s such a tough balance to make, to go for performance or to be comfortable.”