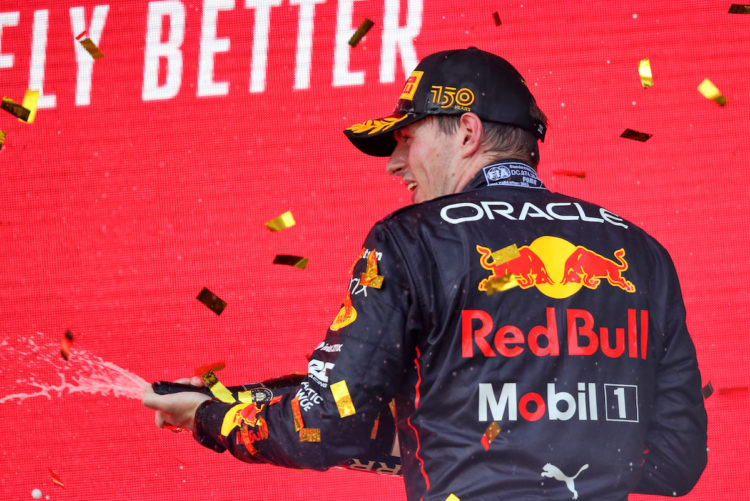 Max Verstappen has taken his fifth race win of the 2022 Formula 1 season, after dominating proceedings at the Azerbaijan Grand Prix.

While it was a strong showing for Red Bull, rivals Ferrari failed to score points at all as both of its cars retired from the race.

Verstappen started from third on the grid, but moved up to second place when pole-sitter Charles Leclerc pitted under an early Virtual Safety Car.

He then set after team-mate Sergio Perez, who took the lead of the race on the run to the opening corner from second on the grid.

Verstappen overtook Perez on lap 15, with the Mexican struggling heavily on his Medium tyres.

In the following laps, the two Red Bull cars pitted for fresh Hard tyres and ran in second and third, however they moved up the order when Leclerc retired with an issue.

That left Verstappen and Perez to take first and second at the chequered flag, with George Russell crossing the line in third, taking his third podium of the season.

Carlos Sainz was the first retirement from the race, as he pulled into an escape road early on in the grand prix.

Running in fourth place and dropping back from the leading trio, Sainz reported a brake-by-wire failure as he approached Turn 4 on lap nine of the race.

The subsequent Virtual Safety Car saw team-mate Leclerc pit for fresh tyres, however the Monegasque driver’s day was undone by a hydraulic issue, forcing him to retire for the second time in three races.

Leclerc has now dropped further behind in the Drivers’ standings, sitting 34 points behind Verstappen in third place, with Perez moving to second place.

Ferrari has also lost more ground to Red Bull in the Constructors’ Championship, and is now 80 points down on their rivals.

Lewis Hamilton made a late recovery to cross the line in fourth place, having pitted under a VSC caused by Kevin Magnussen’s retirement.

The seven-time World Champion made overtakes on the AlphaTauri’s of Yuki Tsunoda and Pierre Gasly to come home behind team-mate Russell.

Gasly was fifth, and Tsunoda was on course for a strong haul of points before a black and orange flag for a DRS issue forced the Japanese driver into the pits and out of the points late in the race.

Sebastian Vettel was sixth, taking his best result since last year’s Belgian Grand Prix, ahead of Fernando Alonso in seventh.

Daniel Ricciardo made his only pit stop under the VSC for Magnussen, and ended up ahead of team-mate Lando Norris. Esteban Ocon took the final point in 10th.