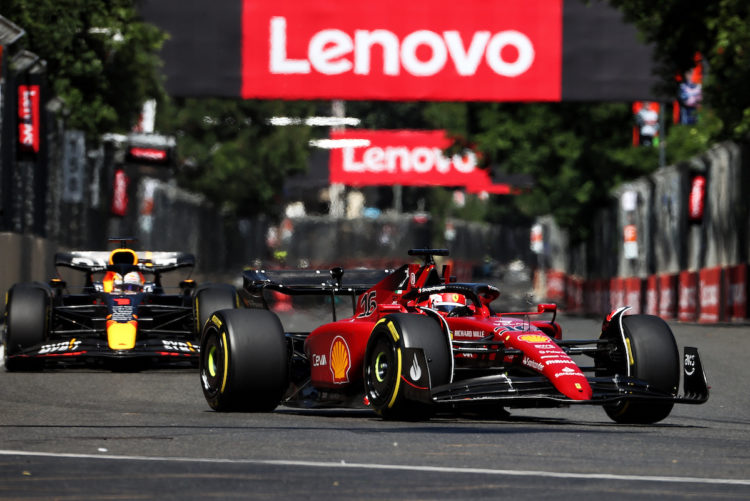 Max Verstappen has provided his thoughts on Charles Leclerc’s retirement from the Azerbaijan Grand Prix, hinting he has little sympathy for the Ferrari driver.

Leclerc was leading the race when a hydraulics issue forced him to return to the pit lane and retire from the race.

It marked the second time in three races that Leclerc has failed to finish a grand prix after starting from pole position.

Verstappen went on to take the win ahead of Red Bull team-mate Sergio Perez, his fifth victory of the 2022 campaign, allowing him to stretch his lead at the top of the Drivers’ Championship.

When asked if he had sympathy for Leclerc’s situation, Verstappen said: “I would always say shit happens. That’s racing, you know?

“If I would be in the same situation I would also be disappointed, I think that’s very normal, but it’s about how you come out of it.

“You always look at how to improve things and that’s what we did as well at the beginning of the season.

“You learn from it, you don’t like it, you are angry, but you turn it around. You always have to stay on it because something else might happen and you have to prevent these issues from happening.”

Leclerc pitted prior to the Red Bull cars under a Virtual Safety Car, and had a sizeable gap over his two rivals after Red Bull changed tyres.

However, Verstappen believes that he would’ve had the pace to close in on the Monegasque driver and challenge for the race victory.

“As soon as we got out [of the pits] and they told me the gap was about 12 or 13 seconds I thought that was a bit of a gap to close,” Verstappen said.

“But I saw his pace and thought ‘let’s see if we can fully close that gap’.

“I had confidence with the car we had today and the pace we had that it would have been an interesting fight to the end.”