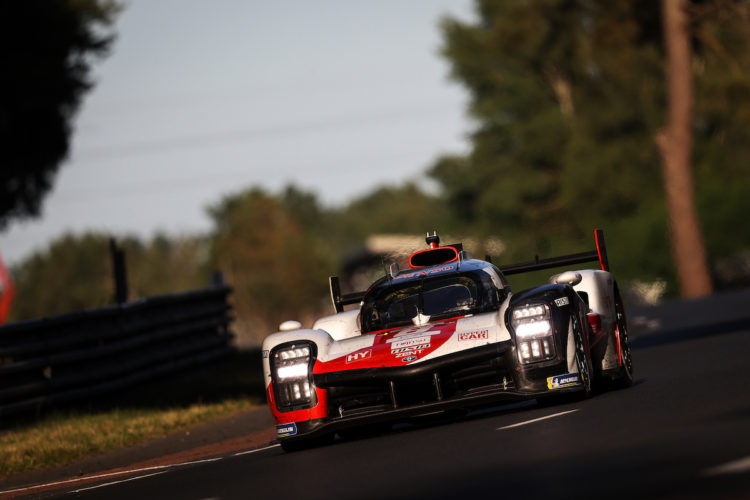 Toyota lead 1-2 at Le Mans with under six hours to go, with Brendon Hartley driving the #8 Toyota GR010 ahead of Jose Maria Lopez in the sister #7.

The two have run almost trouble free all race. The #7 had an issue during the night, with electrical gremlins causing it to lose a lap to its teamcar. Lopez stopped out on track, power cycled the car and got it back to the pits, but as the car’s hybrid electrical safety light was red, the team couldn’t touch it. Lopez managed to power cycle it again, which made it safe to touch, and it returned to the track, a lap down from the lead.

The #709 Glickenhaus 007 is third, with Ryan Briscoe four laps down on the leading Toyota. It has, though, run trouble-free all race.

Romain Dumas in #708 Glickenhaus 007 is fourth in class but seventh overall following its issues earlier in the race. Fifth is the #36 Alpine A480, which has been beset by issues all race, most recently Mathieu Vaxiviere crashing at Porsche Curves while overtaking traffic. It sits fifth in LMH but 29th overall, 17 laps off the lead.

Other than the leading JOTA, the class has been close, with #5 Penske in the mix and #31 WRT climbing back up the order after hitting trouble at literally the first corner of the race.

Alessandro Pier Guidi in the #51 Ferrari 488 GTE Evo leads GTE-Pro after a race of attrition in the class. The Corvettes, which qualified 1-2, are both out, the #63 Corvette being set back by multikple issues before being retired shortly before the six hour mark. At the same time as this was confirmed, the #64 Corvette and #83 AF Corse Oreca 07-Gibson LMP2, driven by Francois Perrodo, had a coming together, with Alexander Sims being pitched into the barrier and sustaining heavy damage.

With #51 Ferrari leading, the main challenger is now the #91 Porsche 911 RSR-19 of Fred Makowiecki, who’s about 15 seconds back from the Ferrari. Third in class is the other Ferrari, #52 Ferrari 488 GTE Evo, but Antonio Fucuo behind the wheel is a lap down. The #92 Porsche 911 RSR-19 of  Kevin Estre is a further minute behind after needing bodywork repairs after a tyre delamination caused the entire front of the car to be ripped off during the night and early morning hours.