Russell: Only matter of time before bouncing causes ‘major incident’ 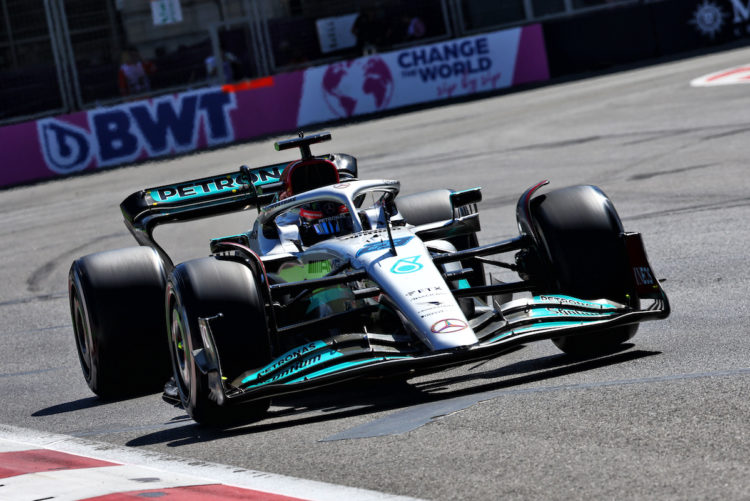 Mercedes’ George Russell believes it is only a question of time before a major crash occurs in Formula 1 due to the bouncing cars in 2022.

This year, F1 introduced a new set of technical regulations, with teams running their challengers as low as possible to the ground to create downforce through the ‘ground effect’ phenomenon.

However, that has also led to an increase in the cars bouncing at high speed, with Mercedes in particular suffering heavily.

Both Russell and team-mate Lewis Hamilton have endured back pain in Azerbaijan this weekend, as their cars have been bouncing at high speed throughout the lap.

Speaking after qualifying in Baku on Saturday, Russell states he’s struggling to keep the car in a straight line due to the oscillations.

“I think it’s just a matter of time before we see a major incident,” Russell said. “A lot of us can barely keep the car in a straight line over these bumps.

“We’re going around the last two corners at 300 km/h, bottoming out, you can visibly see on the tarmac, how close the cars are running into the ground.

“Formula 2 are in the same position as well, they’ve got a similar sort of philosophy, and it’s just unnecessary with the technology we have in today’s environment.

“It seems unnecessary we’re running an F1 car at 200 mph millimetres from the ground and it’s a recipe for disaster.

“I don’t really know what the future holds but I don’t think we ca sustain this for three years or however long these regulations are in force for.”

Russell has called on F1 to group together and uncover a solution, believing it is a serious safety risk to continue driving with the bouncing as severe as he’s experienced.

“You can clearly see they’re really struggling with that. No-one is doing it for performance enhancements, it’s because of safety reasons.

“I can barely see the braking zone because I’m bouncing around so much, and you go around that last corner, you’ve got walls either side of you doing almost 200 mph and the car is bouncing up and down on the floor.

“It’s not a very comfortable position to be in, so yeah, as a group we need a bit of a rethink.”