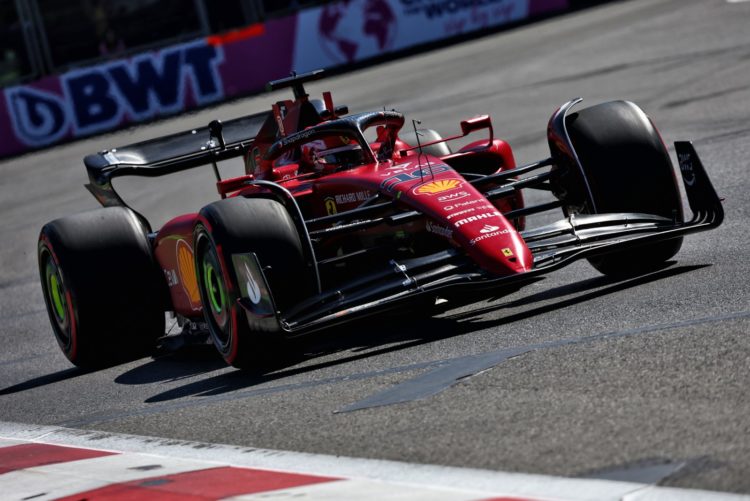 Charles Leclerc surged to a fourth successive pole position, and sixth overall of the season, with a stunning late lap during qualifying for Formula 1’s Azerbaijan Grand Prix.

But through the second runs in the closing moments of the session Leclerc vaulted to the front with a time of 1:41.359s to make it back-to-back poles in Baku.

Sainz, unable to unearth gains on his second push lap after a mistake at Turn 3, was shuffled down to fourth place, behind the improving Red Bulls.

Mercedes’ George Russell was fifth, in front of AlphaTauri’s Pierre Gasly, with Lewis Hamilton salvaging seventh after a close call in Q2.

Yuki Tsunoda was eighth while Sebastian Vettel recovered from a Q2 mistake at Turn 15 to take ninth.

Fernando Alonso rounded out the top 10 for Alpine.

Norris went wide at Turn 15, leaving him unable to improve on his final lap, while Ricciardo was unable to muster sufficient pace to make the top 10.

Esteban Ocon was a subdued 13th for Alpine, while Alfa Romeo had a low-key outing, with Zhou Guanyu and Valtteri Bottas slowest in Q2.

Bottas only narrowly escaped Q1 and was outqualified for the first time by rookie team-mate Zhou, albeit after neither was able to set a second Q2 lap due to Tsunoda running off at Turn 2.

Lance Stroll had a lacklustre session as two mistakes in successive laps scuppered his prospects.

Stroll went straight on at Turn 7, lightly nosing the barriers, but was able to reverse and continue on his programme.

However just minutes later he went wide into Turn 2 and hit the wall, causing terminal damage to the front-right of the car.

That caused a mad scramble to set a final timed effort with only two-and-a-half minutes remaining on the clock after the red flag period.

It was the Haas and Williams drivers who joined Stroll in being eliminated from Q1, with several compromised by a yellow flag, caused when Alonso went wide at Turn 15.