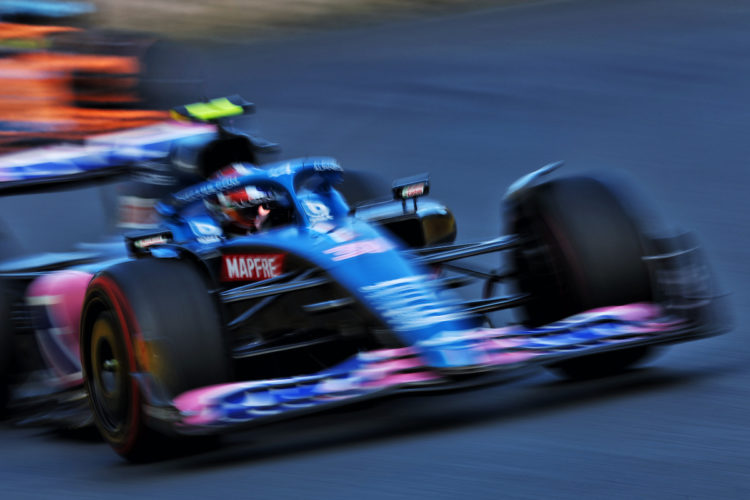 Esteban Ocon says he thought he was going to lose his race helmet due to his rough, bumpy ride in Baku.

Several drivers in the field endured a difficult opening day of practice, with the Formula 1 cars bouncing severely throughout the lap.

A number of drivers commented on the issue after Friday practice, including Ocon, who stated he was aching in his neck.

The Alpine driver says the problem was so intense that he thought his helmet was going to detach from his head towards the end of the straights.

“It’s important to get confident, learn these big braking zones to try and get these bumps under control as well,” Ocon said.

“The head is all over the place, I felt I was going to lose my helmet at the end of the straight line.

“It’s quite tricky for everybody, it’s important to get a feel for that. That’s what we’ve done today.

“It’s not physical for the right reason, unfortunately. It’s very strange, it’s like oscillation, you can’t train or get ready for [it].

“It’s just painful on the body, really. I can feel it on the neck, it’s getting me smaller – hopefully I will lose a couple of centimetres!”

Alpine arrived in Azerbaijan with upgrades to its car, and enjoyed a strong day of running with Ocon ending the day in ninth place.

However, team-mate Fernando Alonso was fourth fastest in the second practice session, hinting that more pace is to come from Ocon.

But the Frenchman is reluctant to put a target on where he expects to end up come the end of qualifying and the race later in the weekend.

“The minimum [target], you can’t always tell because it’s tomorrow when you have to do it,” Ocon said.

“We have to remember it’s a street circuit, there could be yellow flags, red flags. You need to perform when it matters at the right time, so we’ll see.

“It [the upgrades] seems to be working at the moment. I think we have a competitive car for the rest of the weekend hopefully. It was all about just getting a feel out there today.”