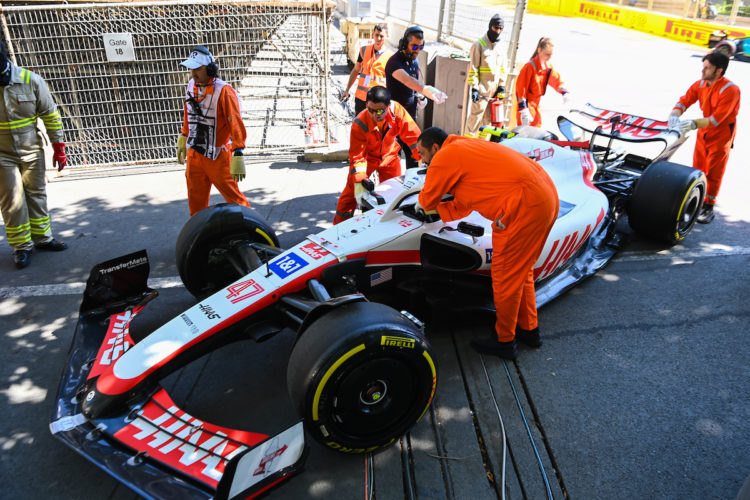 Mick Schumacher’s stoppage during the opening practice session in Azerbaijan was caused by heavy bouncing that the VF-22 encountered.

Schumacher came to a halt on just his third lap at the Baku City Circuit with fluid pouring from the car.

Haas determined that a loose water hose clamp was to blame and was able to address the problem in time for the second session.

A fix was also implemented on Kevin Magnussen’s car to ensure he did not suffer the same setback.

Haas went on to have a subdued afternoon, with Schumacher only 19th, and Magnussen 17th.

“It seems that the problem with the water leak came from the heavy bouncing that we suffered in the first lap, and it just wrecked the plan,” said Schumacher.

“It’s the first time physically that I do feel the effect of it, it’s quite harsh on the body and also on the car, so it’s definitely something to think about for future events.”

Schumacher and Magnussen both hinted that set-up changes made between sessions negatively affected the grip of the VF-22 when conditions cooled.

“The car feels very good actually but in FP2 we weren’t very quick which is a bit surprising – to fall back that much from FP1,” said Magnussen.

“Usually, the trend is that we’re better in FP2 than we are in FP1 and today it was the opposite, so we need to look into that and see if we can find something. I’m still positive, this race is a crazy one where lots can happen.”