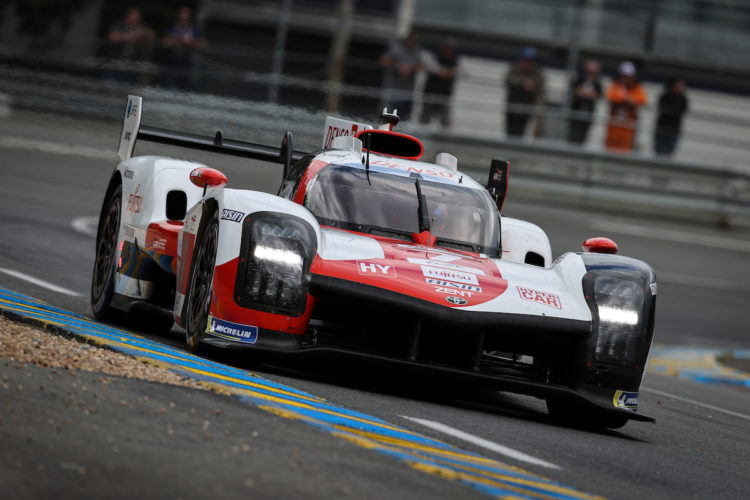 After half an hour of interrupted running, a heavy crash at the first chicane for actor-turned-racing driver Michael Fassbender, in the #93 Proton Porsche 911 RSR-19 meant the session was red flagged. When it resumed, the forecast rain had arrived in droves, with heavy rain on parts of the 8.5 mile track.

This meant the #8 Toyota, which had not set a lap before the red flag, was in danger of not being able to set a representative lap time at all. However, Brendon Hartley set a 3:40.842 to qualify 29th overall and fifth in class.

That means all five hypercars go through to Hypercar, despite Hartley being over 13 seconds off his teammate’s time, as the top six in each class go through to tomorrow’s session to determine class pole for each of the four classes.

Antonio Felix da Costa, in the #38 Jota, was second. The other four hyperpole spots for LMP2 were occupied by Norman Nato in the #41 Team WRT by RealTeam Oreca 07-Gibson, then Alex Lynn and Filipe Albuquerque in the two United Autosports machines. Taking the sixth and final hyperpole spot was Louis Deletraz in the #9 Prema Oreca 07-Gibson.

Over in GTE, the six factory entries of Porsche, Ferrari and Corvette all earned their spots in hyperpole, with the customer Riley Ferrari missing out.

The #64 Corvette of Nick Tandy was fourth, with the two AF Corse Ferraris, #51 followed by #52, fifth and sixth.

In GTE-Am, the #98 Northwest Aston Martin Vantage AMR set the pace, with Nicki Thiim setting a 3:52.559. Almost a second behind him was the # Kessel Racing Ferrari 488 GTE Evo of Mikkel Jensen. Third was Nick Cassidy in the #54 AF Corse Ferrari 488 GTE Evo.