Jordan: Ricciardo is being mentally destroyed by Norris 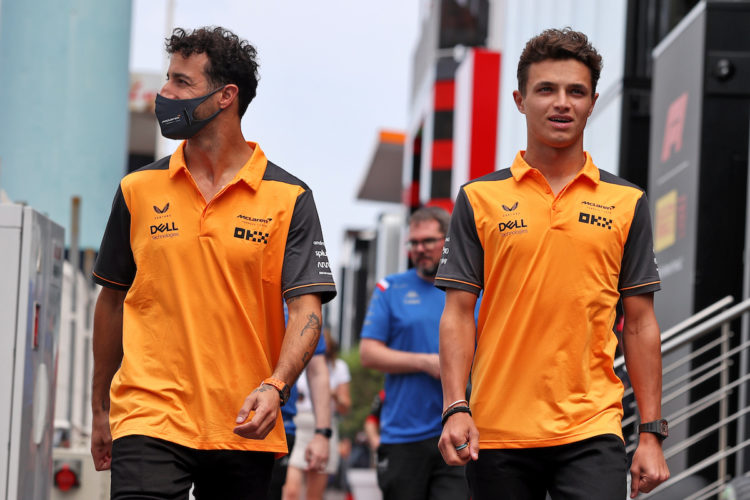 Ricciardo joined McLaren at the start of the 2021 campaign, but has failed to consistently match the pace of team-mate Norris.

Question marks have been raised in recent weeks over Ricciardo’s future at the team, with McLaren CEO Zak Brown admitting that the Australian’s performances have not met the expectations of the team.

Ricciardo asserted that “no one’s going to be harder on me than myself”, while also declaring that he is confident he can regain his form going forward.

But Jordan says that Norris’ performances are taking a toll on Ricciardo, and has questioned if he’ll be able to return to a competitive level.

“Ricciardo is letting the races go by and you rarely get a chance to get this back,” Jordan told Channel 4. “I’m not sure where else he can go.

“Lando is destroying him mentally, physically and on the track and when you have that kind of scenario inside a team, it affects you. So you need to react immediately.”

1997 F1 World Champion Jacques Villeneuve was more direct with his criticism of Ricciardo, believing he has run out of time to impress McLaren.

“Ricciardo’s time at McLaren is up,” Villeneuve said. “Zak Brown is already talking about clauses in his contract, which basically means that they have already made a decision.

“That is a way of preparing the press and putting pressure on the driver. Ricciardo is a driver with a very high salary who is costing the team a lot of money.

“He does not add points and does not have the speed that the team needs to develop the car. So it is costing them money.

“It would be cheaper for McLaren to pay him his full salary and have Ricciardo at home, and have another driver in the car. It’s a harsh reality, but that’s F1.”