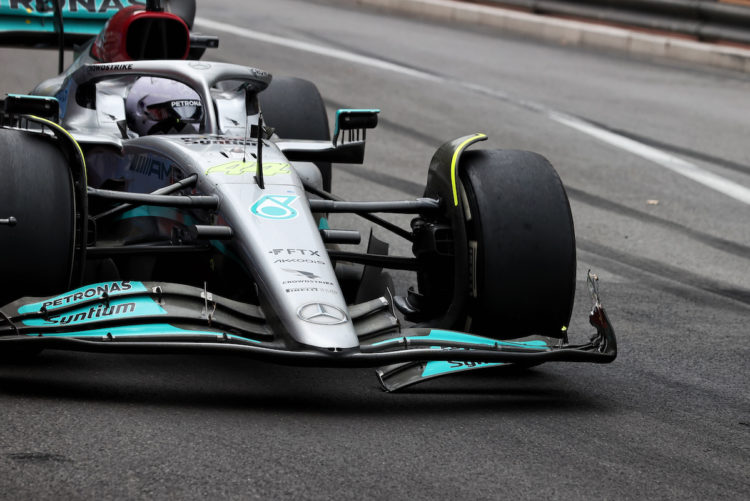 Hamilton made contact with Alpine’s Esteban Ocon on two occasions during the race, coming away with front wing damage in one instance.

Ocon picked up a five-second time penalty for clashing with the seven-time World Champion, a punishment he described as unjustified.

Hamilton went on to cross the line in eighth place, his worst result at the Principality since 2009.

Speaking in Mercedes’ F1 Debrief video, the team’s Trackside Engineering Director Andrew Shovlin says Hamilton was losing two-tenths of a second per lap with his damage.

“It wasn’t too big a number,” Shovlin said. “Looking at the data we get off the car, it was around one to two tenths of a second.

“So not large and conveniently the red flag allows us to repair any accident damage, so we could swap that front wing without actually having any time penalty for doing the work during a pit stop.

“More pleasing was that that was the only damage that we had over the course of the Monaco weekend.

“So, really good job by both drivers to bring the cars home more or less intact.”

After the race restarted following a red flag period for barrier repairs, Hamilton found himself stuck behind the other Alpine of Fernando Alonso.

With Monaco’s track layout offering very little overtaking opportunities, Shovlin says he is sure Hamilton would’ve been competing with team-mate George Russell and McLaren’s Lando Norris further up the field if he was in clear air.

“Almost certainly yes, the frustration with Lewis’s Monaco race was that he spent almost all of it in traffic,” Shovlin said.

“He didn’t get many laps to show what he could actually do but the car was working reasonably well.

“We haven’t got the pace there to compete with the Ferrari and the Red Bull but certainly he would have been in amongst that battle with George and with Lando.”