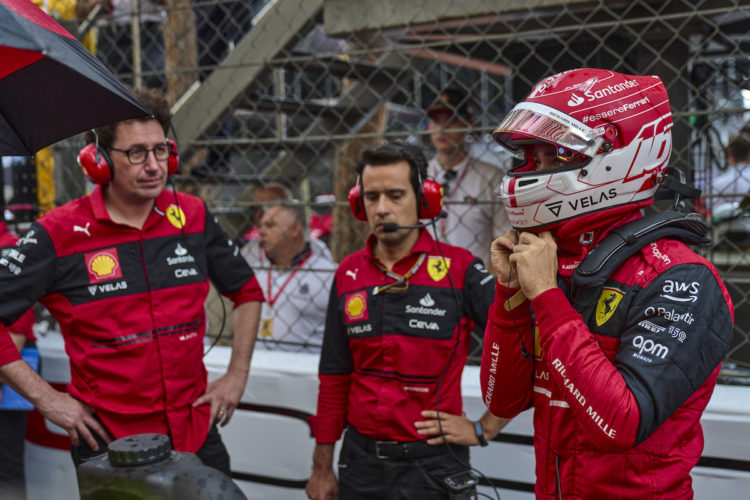 Ferrari team boss Mattia Binotto admits that the team underestimated the pace of the Intermediate tyre when assessing Charles Leclerc’s strategy on Sunday.

Leclerc was leading the Monaco Grand Prix on the Wet compound, but from third place, Red Bull’s Sergio Perez was the first of the front-runners to pit for Intermediate tyres.

Ferrari only called Leclerc in several laps later, which dropped him behind Perez as the Mexican was able to close up the gap on the green-walled tyre.

Leclerc also dropped behind team-mate Carlos Sainz and the second Red Bull of Max Verstappen, and crossed the line in fourth place.

Binotto has accepted that Ferrari made a mistake with Leclerc’s strategy, asserting that it wasn’t expecting the Intermediate compound to be so strong.

“I think we need to admit that if you are leading the race and you are finding yourself in fourth position, you’ve done something wrong,” Binotto said.

“What’s the process that brought us to make mistakes? The first mistake was underestimating the pace of the Intermediates and the gap we had to the other cars in terms of track position.

“I think it’s something we still need to look at. We just had our debrief, we had discussions, we tried to understand.

“But believe me, it was quite a complicated one. It was not an obvious one but certainly we made a mistake.

“We should have called him earlier, at least a lap earlier. Or if not, we should’ve stayed out and simply stayed on the Extreme Wet, protecting the position and then maybe switching directly to dry [tyres].”

Although it was Leclerc leading the grand prix in the early stages, team-mate Sainz stated after the race that he had a chance to win, but ended up stuck behind the Williams of Nicholas Latifi for half a lap following his change from wet to dry tyres.

While Binotto says that the incident likely denied Sainz the victory, he has clarified that Ferrari can’t pin its result on bad luck in Monaco.

“I don’t think it’s a matter of being unlucky,” he said. “I think we could’ve won the race today.

“I think even Carlos, he has been unfortunate because he found Latifi. I think he had been stuck behind him with solid blue flags for at least two sectors.

“I think without that he would’ve been ahead of Perez. There were situations that were not in our favour but I think we made some wrong judgements.”