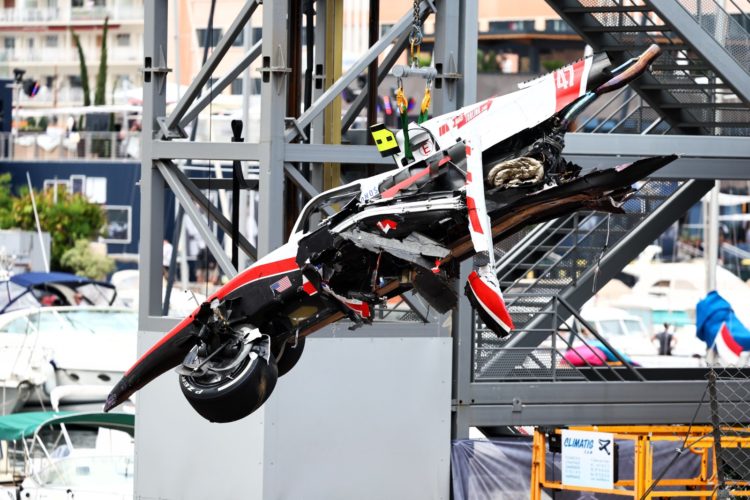 Mick Schumacher says he was “probably about 10 centimetres” too wide prior to his hefty accident at Formula 1’s Monaco Grand Prix.

Schumacher lost control of his Haas VF-22 through Piscine and spun to the right, suffering an impact, before careering across to the barriers on the outside of the circuit.

Schumacher was uninjured in the accident but the race was red-flagged for 20 minutes while repairs were undertaken to the barriers.

“I’m feeling alright, it’s very annoying,” said Schumacher. “In terms of pace, we were definitely there and it’s just a matter of keeping it on track – unfortunately I wasn’t able to do that.

“The pace felt strong and it felt like we were able to attack and push.

“Unfortunately, I went a bit too wide, probably about 10 centimeters at the end, and that’s enough to lose all grip that you thought you had and the result is what happened.”

Schumacher’s accident compounded a difficult day for Haas, with Kevin Magnussen failing to finish due to a power unit problem.

“It was a disappointing day today,” said Haas boss Guenther Steiner. “Kevin’s car was really fast, we were just waiting for our opportunity to pass Bottas at the pit stop, either under or over cutting to get by him and chase the field. He could easily follow him. He then had an issue with a water leak on his ERS system.

“With Mick we obviously saw what happened. It’s not very satisfactory having a big crash again. We need to see how we move forward from here.”