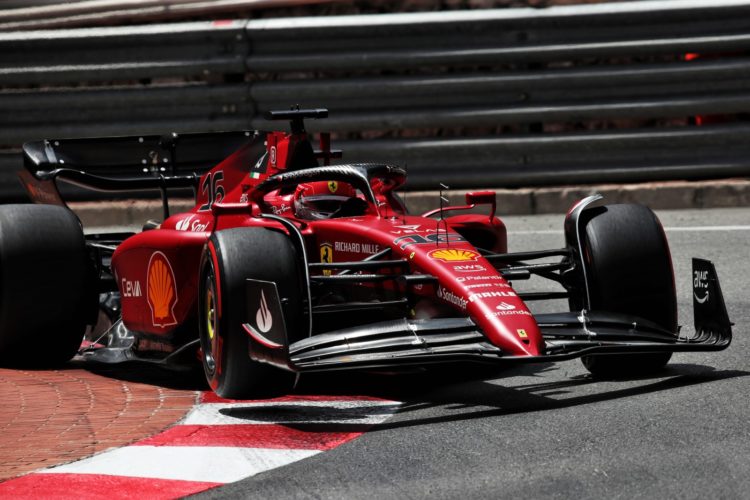 Leclerc posted a benchmark of 1:11.376s to sit comfortably clear of the opposition ahead of the final runs.

Leclerc was on course to improve his pole position time but the session was red-flagged behind him on track following an unusual incident.

Sergio Perez spun into the wall through Portier and was collected by the pursuing Carlos Sainz, who half spun in an attempt to avoid the Mexican.

That blocked the track for the following cars and the session was red-flagged as a result.

With only half a minute left on the clock the decision was made not to resume the session, sealing pole position for Leclerc.

Sainz completed a 1-2 for Ferrari, two-tenths behind his team-mate, while Perez was third.

Russell completed his hot lap before the red flag to move up the order but team-mate Lewis Hamilton’s final effort was scuppered by the stoppage.

That left Hamilton down in eighth spot, behind Fernando Alonso, who ran off into the Mirabeau barriers at the same time as Perez’s accident.

Sebastian Vettel and Esteban Ocon rounded out the top 10.

Yuki Tsunoda caused a brief red flag in Q1 when he clipped the barrier on the entry to the chicane.

Tsunoda was able to return to the pits for repairs and progressed through he session, going on to qualify in 11th place.

Valtteri Bottas suffered a rare Q2 elimination in 12th spot, while neither Haas driver made it through to Q3, leaving Kevin Magnussen 13th and Mick Schumacher 15th.

Daniel Ricciardo’s difficult run of form continued as he languished in 14th place for McLaren.

Neither Williams driver made it out of Q1, with Alexander Albon and Nicholas Latifi 16th and 19th respectively.

Pierre Gasly was unable to start his final flying lap after missing the cut-off in the wake of a brief red flag caused by team-mate Tsunoda.

Gasly had been firmly in the top 10 in the final practice session earlier on Saturday.

Gasly failing to reach the line in time for his last lap left him shuffled down to 17th spot, with Aston Martin’s Lance Stroll 18th.

Zhou Guanyu was in the same predicament as Gasly and wound up at the foot of the order.