Mercedes suggests ‘best of the rest’ its Monaco GP target 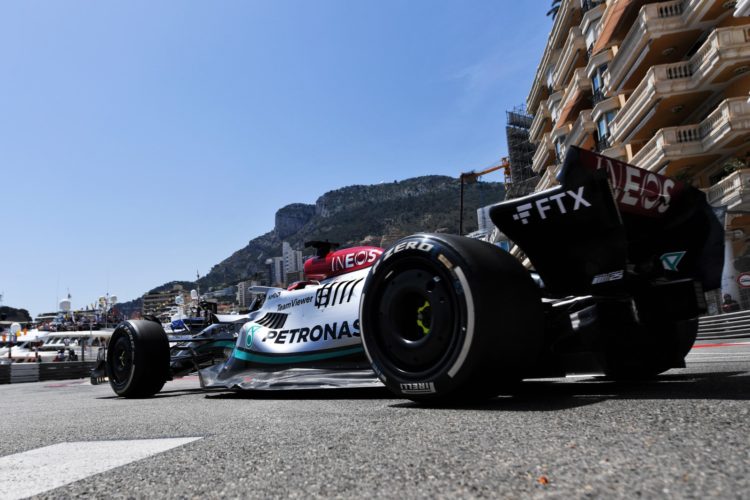 Mercedes drivers George Russell and Lewis Hamilton have suggested its target for the Monaco Grand Prix needs to be to clear the midfield after a subdued Friday.

Mercedes displayed relatively strong pace in Spain but was not in the mix for the leading positions through Friday practice around the streets of Monaco.

George Russell was sixth overall, behind the Ferrari and Red Bull drivers and McLaren’s Lando Norris, while Lewis Hamilton languished down in 12th spot.

Hamilton did not set a representative time on the Soft tyres after making a mistake into Mirabeau.

“It’s been a relatively good day I think but it’s clear we’re not yet where we want to be in terms of performance,” said Russell.

“Monaco is a very tricky circuit with these cars – they are set up very stiff for the aero to work, so it’s not easy to put the car on the limit on a bumpy street circuit like this.

“You’ve got to give the circuit a little bit more respect than you normally would, and there are parts of the circuit where we’re almost doing a wheelie with both front tyres off the ground!

“We’ve got some work to do overnight to see how we can make it a bit easier to drive.

“We now need to get our heads down and see what we can do for tomorrow, so that we’re at least best of the rest behind Ferrari and Red Bull.”

Hamilton explained that he was “fighting to put a lap together” but remains optimistic of gains prior to qualifying.

“The car was bouncing quite a lot today on the bumps, not the aerodynamic bouncing like we’ve had so far this year, but just because we’re running it low to the ground and stiff as well, so we’re bottoming out quite a lot,” he said.

“We improved the car for FP2, and we’ve got some studying to do tonight to find the right mix between ultimate performance and a driveable balance.

“I haven’t put my best sectors together yet, and actually the grip feels pretty good when we’re pushing.

“Ultimately, I think we’ve got the potential to be up there in the mix; maybe not quite on the speed of Ferrari and Red Bull, but I hope we can be ahead of everybody else tomorrow and on Sunday.”