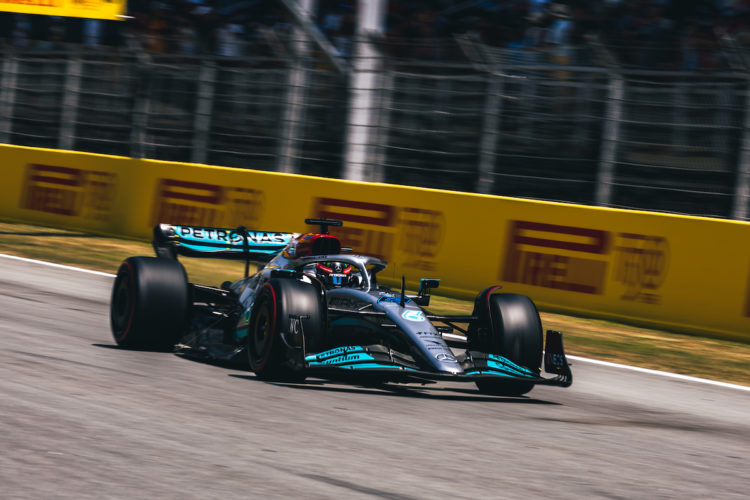 The Mercedes Formula 1 team has asserted that it is not operating under the assumption that it has eliminated its porpoising problem.

From the start of the 2022 season, the reigning Constructors’ Champions suffered severe bouncing at high speeds, which has hindered its pace.

However, at last weekend’s Spanish Grand Prix, Mercedes brought upgrades to the event which aimed to decrease its hurtful impact.

The W13 car looked to be as stable as it has been at any point this year, with George Russell taking a podium finish for the team, while Lewis Hamilton recovered from a puncture on the opening lap to fifth at the chequered flag.

But speaking in Mercedes’ latest F1 Debrief video, the team’s Motorsport Strategy Director James Vowles says that Mercedes is cautious over its gains in Barcelona.

“We’ve had one race out of six where the car has been well behaved,” he said. “It was a car that really was a proper racing car for once.

“We could set it up, we could tune it, we could play around with the settings and it would respond in a way that was predictable and the same couldn’t be said for the car that we had for the first five races of the season.

“However, we have to temper our expectations. It’s one track and a track that has suited our car for many years prior to this one.

“There is a lot for us to understand and learn. I think it would be wrong to say that the porpoising issue has disappeared.

“I think you still see it on our competitors and I am sure there will be elements of it coming back again as we build on our understanding and the foundations that we laid down in Barcelona.”

Although he acknowledged that Mercedes has made a step forward, Vowles says the team is expecting the upcoming races in Monaco and Baku to present it with challenges.

“What I can say is we made a definitive step, a step in our understanding and the deployment of what we put on track,” he commented.

“And we can build on that, and the same could not be said about the first five races with the car that we had there.

“We will move forward from where we are now but it will be a journey, it is not going to happen overnight. And we’ve got difficult tracks coming up, we’ve got Monaco and Baku which will throw up their own challenges and surprises.

“The difference now though is we have a car that is within touching distance of the front and a car that we can fight for a championship with.”