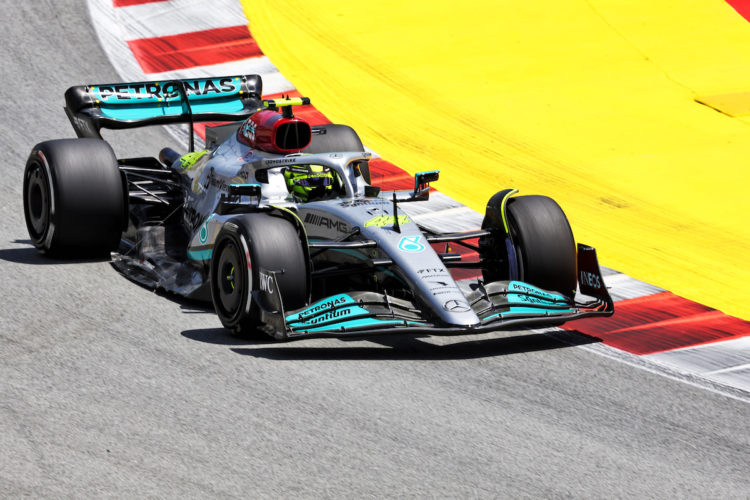 Mercedes team boss Toto Wolff believes that Lewis Hamilton had the pace for the race victory on Sunday at the Spanish Grand Prix.

The seven-time World Champion was forced to produce a recovery drive after damaging his car on the opening lap.

Hamilton sustained a puncture following contact with Haas’ Kevin Magnussen, as the two attempted to go side-by-side around Turn 4.

Throughout the remainder of the race, Hamilton picked his way through the field and overtook Carlos Sainz for fourth place late on, before he was forced to drastically drop his pace amid a reliability concern.

The 37-year-old’s pace was so strong during his recovery that Wolff believes he had the speed to win the grand prix.

“It’s always the call when you’ve basically lost the race to decide, what’s the benefit of continuing?” Wolff said, speaking about Hamilton’s radio call to save the engine.

“But as a driver’s perspective you’re like, ‘that can’t be possible, I’m 50 seconds behind the leaders’.

“But it’s still valuable mileage, we are never giving up anyway. At the end his race pace was stunning. He would have raced for the win.”

Expanding on the team’s reliability issue at the end of the race, Wolff said: “We saw this growing during the race, it was not clear whether we would finish.

“At the end it was literally just making it over the line. Not sure [if] we damaged the engine.”

Mercedes has endured a difficult start to the 2022 campaign, but its pace in Barcelona suggests that the reigning Constructors’ Champions are progressing forward.

“It’s better than expected because I’m always so pessimistic about things,” Wolff said.

“We’ve played clear from the midfield, at least in Barcelona, and caught up by half a second to the frontrunners.

“We were a second off and now it’s half a second and there’s more to come, more understanding now which we can unlock in the car, I’m sure about that.”