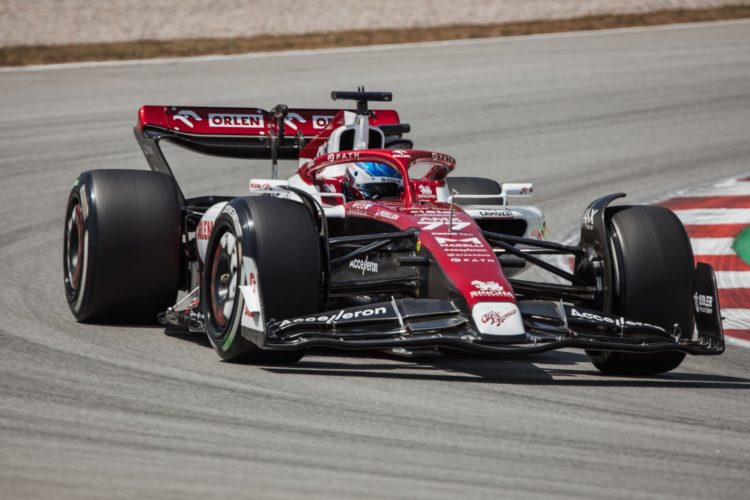 Valtteri Bottas says Alfa Romeo can head into the upcoming rounds with confidence after being lifted by another strong display in Spain.

Bottas scored points for the fifth time in six grands prix in 2022 and did so with a comfortable sixth place, having briefly occupied the podium spots when rivals pitted.

Bottas achieved sixth despite running a two-stop strategy on a day where a three-stop approach proved to be more profitable.

“I think the tyre life of the Mediums was maybe a bit shorter than we estimated, so the last stint became a bit too long,” he said.

“I really, really struggled with the tyres towards the end of the day, but we still got good points, some points, the potential is pretty strong so we can take some positives from this weekend.

“It’s nice that we can battle with the big teams, at times, so that’s good and we also seem to have a pretty good gap for the cars behind.

“We made really good progress this weekend and that’s thanks to the upgrades we brought here.

“Also, this type of track doesn’t play to our strengths, so I think we could be better next week.”

Expanding on those comments Bottas expressed his belief that Alfa Romeo’s C42 should be well-suited to the upcoming event in Monaco.

“It’s a very different circuit to this one and I’ll be already in the simulator [on Monday], but I really believe it will suit our car strengths pretty well, so I’ve got big hopes for the next weekend,” he said.

“I’m thinking it should be one of the best tracks in the calendar for our car. For sure the upgrades we brought for this weekend will also help us there, and with a nice big rear wing, we should be good in Monaco.”