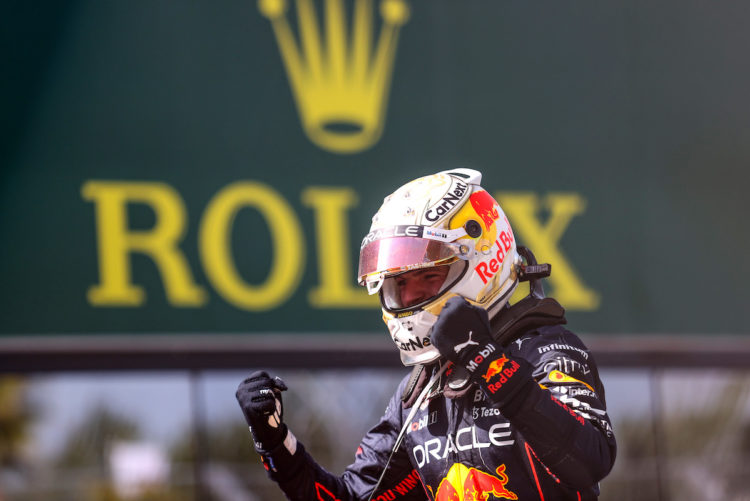 Max Verstappen has taken the lead of the Drivers’ Championship after winning the Spanish Grand Prix, leading a Red Bull one-two finish.

Verstappen’s title rival Charles Leclerc was forced to retire from the event, after he suffered a mechanical issue on lap 27 of the race.

Up to that point, Leclerc had led every lap of the grand prix, and looked to be on course for a comfortable victory.

However, the issue dropped him out, promoting George Russell into the lead – Verstappen had moved behind after making a mistake and going off the circuit at Turn 4 on lap 9.

Verstappen was later able to jump Russell in the pit lane, having struggled to pass the Mercedes on-track driver due to a DRS issue. His team-mate Sergio Perez passed Russell on track, and soon after Verstappen made his final pit stop, he moved ahead of Perez for the lead.

The result marks Red Bull’s second one-two finish of the 2022 season, while Russell was third on the road, collecting his second podium result for Mercedes.

Lewis Hamilton dropped to the back of the pack on the opening lap of the race after making contact with Haas’ Kevin Magnussen.

The seven-time World Champion was forced to pit after sustaining a puncture, however he made his way through the pack throughout the 66 laps, making three pit-stops.

In the dying stages of the race, he overtook Carlos Sainz around the outside of Turn 1 for fourth place.

However, Sainz soon moved back ahead of Hamilton, who was told to perform heavy lift and coasting during the final three laps.

Sainz also had to undertake a recovery drive after he spun off the road at Turn 4 in the opening laps, just a few minutes before Verstappen made the same mistake.

Valtteri Bottas was sixth for Alfa Romeo, continuing his strong start to the 2022 campaign – however the Finn was left unhappy with his strategy after being passed by Sainz and Hamilton late on.

Lando Norris is enduring a suspected bad case of hay fever in Barcelona, however it didn’t deter the McLaren driver from progressing forward in the race.

Starting from outside the top 10, Norris made his way into eighth place at the chequered flag, behind the Alpine of Esteban Ocon.

Ocon’s team-mate Fernando Alonso, who began the grand prix from the back of the grid, moved to ninth place with a fresh Power Unit aiding his cause.

Yuki Tsunoda secured his third top 10 result of the season, taking the final point on offer in 10th place.

Sebastian Vettel and Daniel Ricciardo were 11th and 12th respectively, ahead of Pierre Gasly and Mick Schumacher.

Guanyu Zhou was the only driver to join Leclerc on the sidelines as he too suffered from a mechanical problem during the grand prix.