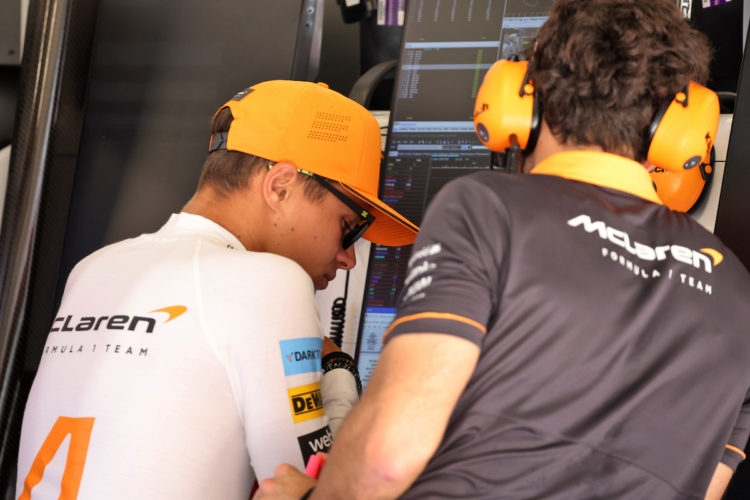 Lando Norris was forced to deal with a case of tonsillitis during the Spanish Grand Prix weekend, making it “one of the toughest races” he’s ever done.

Norris started the grand prix from outside the top 10, but progressed forward during the race, crossing the line in eighth place.

The Briton was noticeably unwell throughout the event, with his condition not aided by the sweltering conditions that were present in Barcelona all weekend.

Norris revealed that his illness was so severe that he was forced to skip engineer debriefs, which meant his preparation for qualifying and the race was far from his usual standard.

“Today was tough. I was feeling really unwell before the race as I’m suffering with tonsillitis, and that, in combination with the high temperatures, made this one of the hardest races I’ve ever done,” Norris said.

“I’ve been a bit on the backfoot this weekend as most of my energy has been spent fighting off this illness.

“I’ve had to miss a lot of engineering sessions, which has compromised my weekend, and I definitely wasn’t as prepared for the grand prix as I could have been.

“With that in mind, I’m really pleased to have come out of the race with decent points for the team.”

McLaren team boss Andreas Seidl commended Norris for fighting through his illness to deliver points for the team.

“Lando did not feel well all weekend but showed great fighting spirit battling it through and bringing home some points for the team,” he said.

“We wish him a speedy recovery now in the next few days and will hopefully have him back at full energy in Monaco in a couple of days.”

Daniel Ricciardo failed to score a top 10 finish in the second McLaren, crossing the line in 12th place.