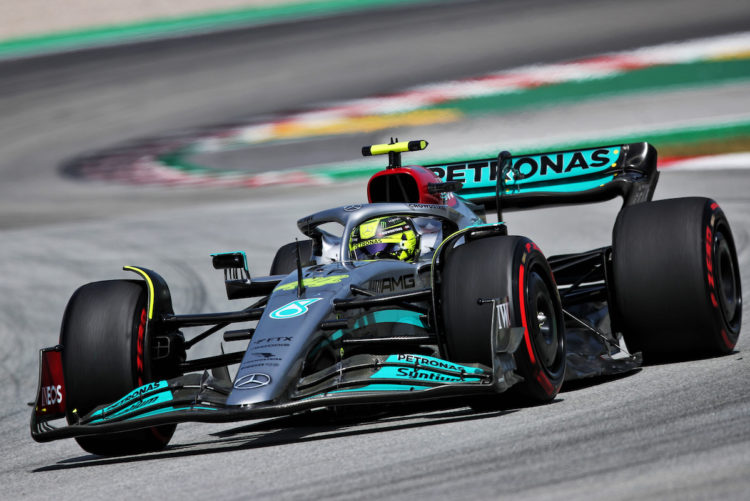 Lewis Hamilton was left relieved that Mercedes opted not to follow his advice of saving the engine following his lap one collision with Kevin Magnussen.

Hamilton sustained a puncture in the incident at Turn 4 and was forced to return to the pit lane for a fresh set of tyres.

The seven-time World Champion called on the Mercedes team to save the engine for later in the season, as he was half a minute behind the pack following the stop.

However, Hamilton recovered to score a fifth place result, while team-mate George Russell took his second podium of the year in third.

“I was 30 seconds behind so I thought if I am going to use a whole engine to drive around in last or out of the top 15 and at some point take a penalty,” Hamilton explained.

“I thought we may as well save the engine so we can live to fight another day. Thank god we didn’t, that is why we never stop we never give up and that’s what I did.

“I was hoping for a smoother race without the issue at the beginning. Having seen what it was like back in Jeddah where I started 15th and struggled to get into the top 10, I was thinking this is impossible to get back into the points.

“They said no I was on for eighth – I couldn’t understand it and thought they were definitely being super optimistic. But I thought let’s give it everything and see where I come out.”

Hamilton also passed Carlos Sainz for fourth place but was forced to take drastic measures to cool the car in the final laps, which saw the Ferrari driver move back ahead.

Speaking to Sky F1, Hamilton says that he was driving at just half throttle down the straights in order to cool the car.

“It was a lot hotter than predicted today and it’s quite tough with these cars,” he said.

“I don’t know exactly went on with the car, I’ve not spoken with the team because I’ve been elsewhere.

“But I had to basically just drive it at half-throttle and lots of lifting down the straights just to try and get fresh air into the engine to try and cool it down.”