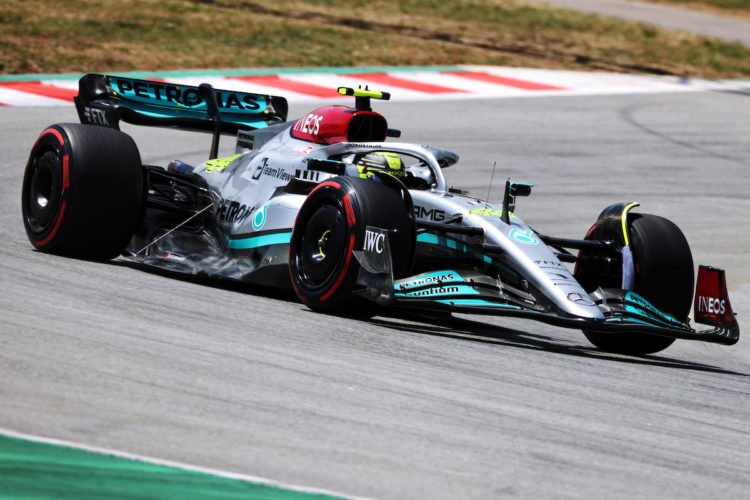 The reigning Constructors’ Champions brought new parts to the floor for the Spanish Grand Prix weekend, as well as updates to to the rear corner and front wing of the car.

Mercedes has been suffering with severe bouncing at high speed in the opening stages of the season, which it believes is limiting the car’s potential.

However, the issue didn’t appear to be prevalent in the first two practice sessions on Friday in Barcelona, with Hamilton commending the work done by the Mercedes outfit.

“[I’m] super happy with the progress,” Hamilton said. “So big, big, big, big thank you to everyone back at the factory for not giving up.

“We’re not the quickest yet but I think we’re on our way. it’s the first time we’ve driven down the straight without bouncing, we still have some bouncing, but it’s way better.

“So yeah, starting to eke into a bit of the potential in our car. It’s still tough out there with the car but it’s much nicer than it’s been before.

“[I’m] really grateful for those upgrades, now we need to fine tune them into the next session, overnight lots of data to go over, try and position the car.

“I think we can get it into an even better place for tomorrow, so hopefully we can tackle the heels of the guys up ahead.”

Hamilton ended the second practice session in third place, while team-mate George Russell was in second.

The former Williams driver was one-tenth behind session leader Charles Leclerc, but remained cautious over Mercedes’ expectations for the remainder of the race weekend.

“I don’t know [where Mercedes is] to be honest because in Miami we were quickest on Friday and here we’re second,” Russell said.

“The car is definitely reacting differently, we’ve got different limitations this time, we definitely don’t have the porpoising in the straight, which is good.

“But we’re still experiencing a little bit here and there in the corners, which ultimately you need to dial it out through the corners.

“I think Red Bull still look very, very strong – they look like the team to be reckoned with at the moment. We need to go through the data.”