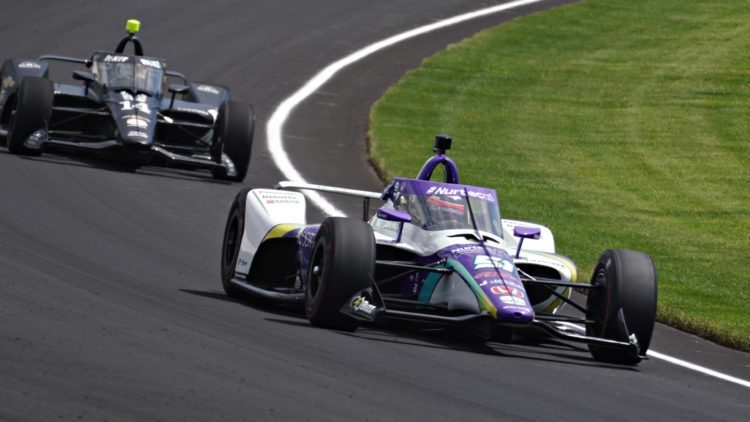 Takuma Sato was once again fastest in Thursday’s Indianapolis 500 practice, putting in a lap averaging 227.519 MPH.

With Wednesday’s session rained out, Sato has been on top of the timesheets for both days of running so far and looked very comfortable on track in his Dale Coyne Racing Honda.

Also matching Tuesday’s order was Scott Dixon sitting in second place.  The Chip Ganassi Racing veteran put in a fast lap early in the day that was only beaten in the final hour of running.

Will Power led a couple Ed Carpenter Racing entries on the no-tow list, which shows performance in empty track conditions and previews who has the fastest car for qualifying.

Jimmie Johnson completed the most laps on the day at 153, and an incredible total of 3,114 laps were turned by the entire field.

Colton Herta and Marco Andretti had problems during the session with their weight jackers, the driver-adjustable component of the rear shocks that allows real-time changes in balance of the car.

Crews for both cars were able to get the problem fixed quickly, and each was able to get back out on track with minimal delays.

There was a mix of strategies for the day, with some drivers continuing to dial their car in for race pace while others tried to start getting comfortable with qualifying setups.

As a consequence of the varying motivations, some drivers were searching for clean track with no slipstream and the rest were purposely mixing it up with other drivers to simulate race conditions.

Jimmie Johnson and Romain Grosjean each had hairy moments on track, and had to back out of the throttle to keep their cars from drifting up into the wall at the exit of turn 2.

No driver caused any damage to his ride, however, there were only a couple stoppages during the six-hour session for quick track inspections by officials.

The weather was cloudy and warm, with rain holding off just long enough to get the entire scheduled session completed.

Thursday’s running was the last day of practice with the normal amount of turbocharger pressure until next week, and from Friday drivers will be able to sample their cars with an increased bit of power allowed for qualifying.

The extra boost should provide approximately 60 additional horsepower, and will bring average speeds up over 235 MPH.

The weather on Friday is forecast to be quite windy, and that could cause quite a few hair-raising moments as the delicate balance of the cars can easily be upset by gusts across the track.