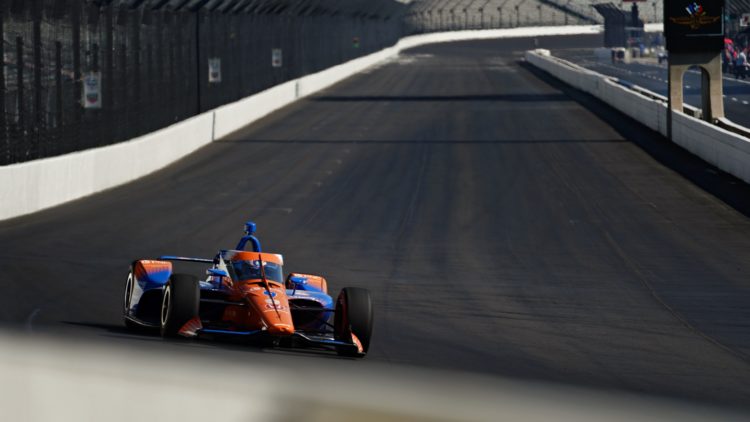 Dixon had the track to himself at times in the morning practice session. Photo: Kevin Dejewski

The first day of practice is underway at for the Indianapolis 500, and Scott McLaughlin led the way out of the pits for the first official laps of the 106th running of the great event.

After the two-hour morning session was complete, it was Scott Dixon that had logged a fastest lap of 227.119 MPH by time the lunch break came around.

Speeds are favored over lap times for the famous event on account of the nearly 1000HP cars travelling faster here than at any other event of the calendar.

Rookie Kyle Kirkwood used the early morning to its fullest, and set the most laps of anybody by completing 54 laps of the 2.5-mile oval.

Takuma Sato, however, only completed four laps. Nothing to be concerned about at this point with the Dale Coyne Racing team, as there is plenty of time over the next two weeks to get the car dialed in.

Ed Carpenter had a bit of an exciting moment as the left bank of his engine began smoking after each of the first installation laps he ran.

The safety crew came over to investigate, but it seems that it was nothing more than a bit of leftover sealant on the outside of the brand new engine, and the veteran was soon back out on track.

Jimmie Johnson and Dixon had similar issues after a few laps of full speed running, but the dramatic smoky images looked more concerning than the situation actually was.

Aside from a few smoking cars, there was minimal drama on track.  A variety of situations were tested by 32 drivers, and at times drivers were testing out passing each other into the corner.

After a short break to discuss the early numbers, drivers will be back for further running in the afternoon.