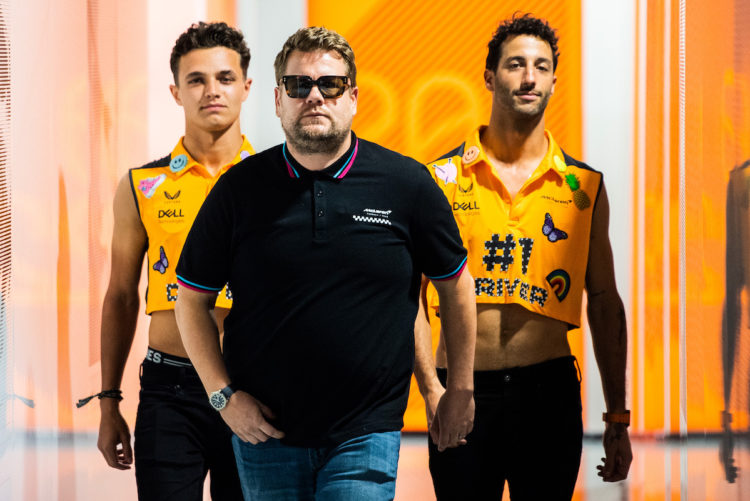 F1’s most recent grand prix was held in Miami for the first time, which is the first of two races in the US this year.

In 2023, there will be three US-based races on the calendar, with Las Vegas joining the schedule alongside Miami and Austin.

The build-up to the Miami Grand Prix saw high levels of marketing, with many celebrities in attendance throughout the weekend.

Ricciardo and team-mate Lando Norris were also involved in a piece with TV host James Corden, which gained a lot of attention on social media.

F1 in the US has seen significant growth in the last number of years, with last season’s US Grand Prix among the highest attended weekends in the sport’s history.

However, Ricciardo asserts that the sport’s rise in popularity in the country doesn’t feel forced.

“For sure the sport’s getting a massive push here in the States,” Ricciardo said.

“I don’t feel it’s forced, you know, everyone’s pushing it because everyone wants to see it and the interest is so high and it’s been really cool.

“I think ultimately for us it’s not about being on TV more or whatever, it’s about being able to share the sport with a bigger audience, you know.

“I keep relating, when I was at school there was me and one other kid who were watching F1, it was two of us in a school of hundreds of kids.

“So, now I feel it’s so much more. It’s just more people talk about it, it’s cool for us to share it. And it’s been a passion our whole lives.

“To bring in a new audience and I’m sure there’s people in the States probably didn’t know what F1 was a few years ago, and now, it’s one of their favourite sports. So that’s really cool to hear.”