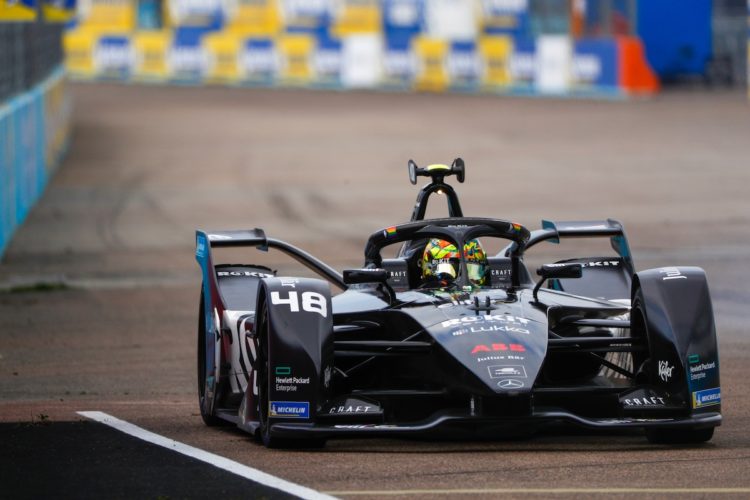 Edoardo Mortara took his second race victory of the 2021/22 Formula E season, as he dominated proceedings in Berlin.

The Swiss driver lined up at the head of the pack just a handful of hours after securing pole position for the first of two races in Germany’s capital this weekend.

Mortara held onto the lead in the opening sequence of laps, and went deep into the race before taking his first Attack Mode, offering him a boost in power for four minutes.

Although he dropped behind Andre Lotterer when passing through the sensors, he soon moved back in front of the Porsche driver.

Mortara took his second and final Attack Mode with nine minutes remaining, and this time descended to third in the order, behind Lotterer and Stoffel Vandoorne.

However, Vandoorne and Lotterer had less Attack Mode time than Mortara, and soon, the Venturi driver found himself at the front of the field once again.

Behind, Jean-Eric Vergne was progressing forward and found himself inside the top three, chasing Vandoorne.

After moving past the Mercedes driver, Vergne set his sights on the race win, and briefly progressed ahead of Mortara with an attempted overtake – however Mortara successfully completed the switch back and stayed in front.

The short tussle allowed Mortara to build a lead while Vergne came under pressure from behind on the final lap.

However, the two-time Formula E Champion stayed ahead of the chasing pack, crossing the line in second place ahead of Vandoorne.

Lotterer was fourth at the chequered flag, ahead of Mitch Evans in fifth.

Pascal Wehrlein was looking strong early in the E-Prix but had to settle for sixth, ahead of Sam Bird.

Lotterer dropped all the way down to eighth by the end of the race, but managed to stay in front of Alexander Sims, who couldn’t convert his front-row starting position into a podium.

Taking the final point on offer in 10th was the reigning World Champion Nyck de Vries.

The second race from Berlin will get underway on Sunday afternoon at 14:30 local time, after a morning qualifying session to set the grid order.