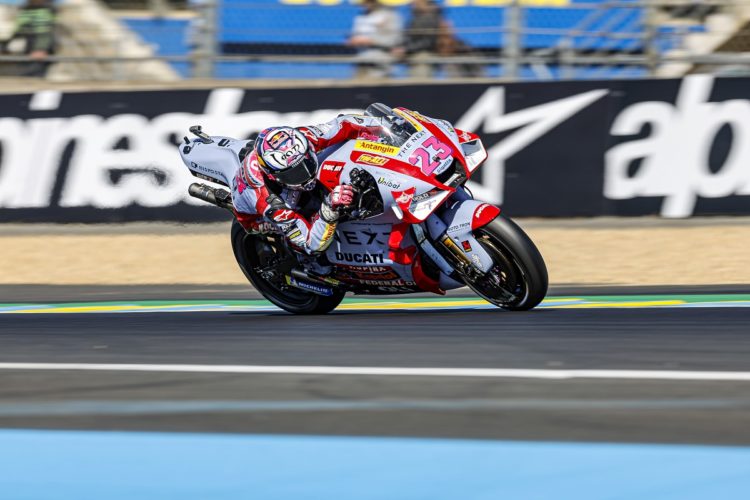 Enea Bastianini fired in a new two-wheeled lap record of the Le Mans circuit to end Friday fastest ahead of Aprilia’s Aleix Espargaro.

The Italian elected to focus on race preparation for the bulk of the FP2 test, though after bolting on a fresh set of Michelin rubber to his Ducati he looked to possess an impressive turn of speed.

Despite losing two of his final three flyers as a result of short-cutting the circuit, Bastianini’s third effort was blistering – the two-time 2022 race winner banging in a 1:31.148s to post a new lap record of the Le Mans venue – putting him over four tenths-of-a-second clear of his pursuers in the process, though a crash at Turn 1 just after posting his improvement put a dampener on proceedings.

Several other riders managed to find an improvement on their own final gambits, with Aleix closing to just 0.202s adrift of Bastianini at the death to end the day second quickest ahead of Suzuki’s Alex Rins.

Johann Zarco was fourth overall on his Pramac Ducati – despite a scary run-on across the gravel trap at Turn 1 – ahead of the factory example of Francesco Bagnaia, while Fabio Quartararo ended up sixth after failing to find an improvement at the end having led the way in the early stages.

Brad Binder gave KTM a more encouraging seventh on the timesheets after struggling in the opening practice outing ahead of Joan Mir – who took eighth despite suffering a high-speed spill at Turn 7 in the early reaches of the session – while FP1 leader Pol Espargaro and the sister Pramac Desmosedici of Jorge Martin completed the top ten.

Mir wasn’t the only rider to fall victim of Turn 7 as FP2 progressed with Marco Bezzecchi, Darryn Binder as well as LCR Honda’s Alex Marquez all tasting the gravel on the exit of the bend after losing the front of their respective machines on corner entry.

Jack Miller ended Friday just outside the top ten in 11th ahead of the other factory Yamaha of Franco Morbidelli and Aprilia’s Maverick Vinales, while Marc Marquez was forced to settle for 15th after again struggling for outright speed.