Miami GP chicane ‘not made for modern F1 cars’ 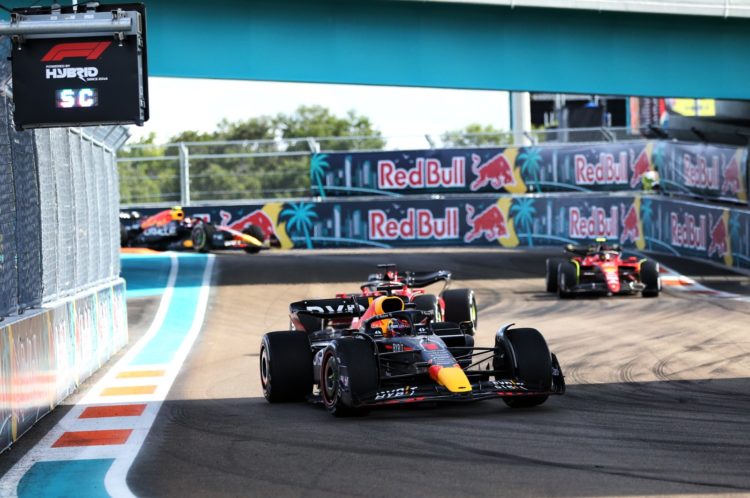 Leading Formula 1 drivers are hopeful that the Turn 14/15 chicane at the Miami International Autodrome can be tweaked in order to help racing.

Drivers had a couple of criticisms, the first being the surface itself and the off-line problems – which inhibited the racing – and the second being the awkward Turn 14/15 chicane.

It is understood that the layout was designed in such a manner in order to slow drivers down for the left-hander at Turn 16 – where there is no run-off – as well as to ensure the circuit complies with FIA minimum height regulations owing to the overhead turnpike.

Drivers have suggested that they will lobby for revisions to be made prior to 2023’s event.

“I think it’s a chicane that with this generation of cars that are heavy, that are wide, just when you go around those two apex kerbs, it almost feels like you need a bit of luck to get around it and you sometimes get it on a weird angle and the car bounces a lot,” said Ferrari’s Carlos Sainz.

“It’s a new track that you’re always going to go through these phases and we’re already in touch with FOM, with Ross [Brawn] and his team to actually sort it out and put together a better piece of circuit.”

World Champion Max Verstappen quipped that “if I would have been in a go-kart it would be a nice chicane to take but not in an F1 car like we have at the moment.

“If you just take it [the first kerb] a tiny bit too much, just because it’s so long, so wide, so stiff and super heavy that little kerb what it is, it’s just not made for it to be honest.

Charles Leclerc added he “actually liked this chicane” but conceded that “for racing action I think we can do something better because following wasn’t easy on that part.

“Also for visibility it’s quite difficult once you have a car in front because you need to be so precise on the kerbs, as mentioned already. That it makes it even more difficult to follow.”