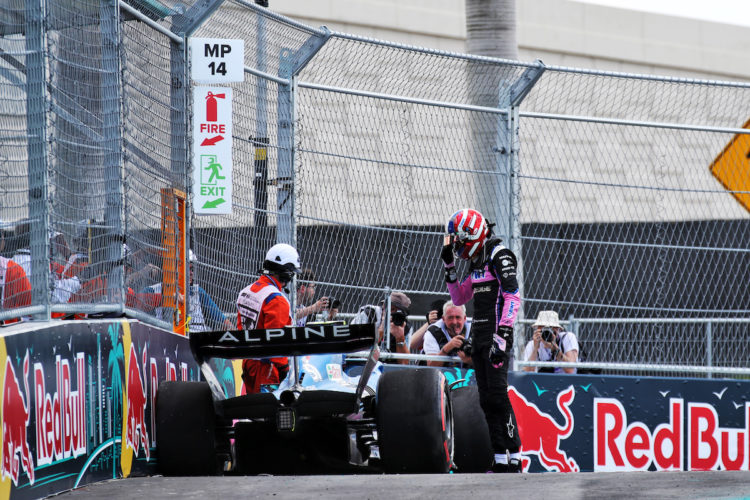 Esteban Ocon says he was operating at 50 per cent capacity during the Miami Grand Prix after his crash during the final practice session.

The Frenchman lost control of his car as he approached Turn 14 and hit the concrete barrier, with his car sustaining heavy damage.

Drivers questioned why an alternate barrier wasn’t put in place in the area after Ferrari’s Carlos Sainz hit the wall in the same section on Friday.

The Spaniard also stated that he wasn’t able to compete to his usual physical standard due to the pain he sustained in the collision.

Ocon says that he was feeling sore in multiple areas after the crash registered 51Gs.

“I have to say a big thank you to the boys because everything was broken in the car,” he said.

“I checked [Sunday] morning, the seat was in pieces, the pedal box was completely broken.

“The throttle, brakes, it’s broken. It was a big impact, I feel 50 per cent today. We made it, it shows we are doing a good job physically.

“The [injuries were to the] knees mainly, the lower back, little bit of bruises here and there on the heels. It was 51G, so pretty painful.”

Ocon was forced to skip qualifying on Saturday following the crash, but recovered on race day to eighth in the order.

The Alpine driver started the race on a set of Hard tyres at the back of the field, and benefitted from a late Safety Car intervention, which gave him the chance to fight for points.

“I am delighted. I think it is a victory for us,” he said. “There was clearly a mountain to climb for all of us.

“But I think from the strategy, the radio calls, the tyre management, everything was perfect today. To end up in the points, 50 per cent physically as well, it feels like a win.

“We knew what we wanted to do, we had to go very long with the Hards. We wanted to get this tyre to last long, so I was managing quite a bit at the start.

“But we were not very fast at the start. The pace increased slowly. And we became very, very quick in comparison to the other cars.”