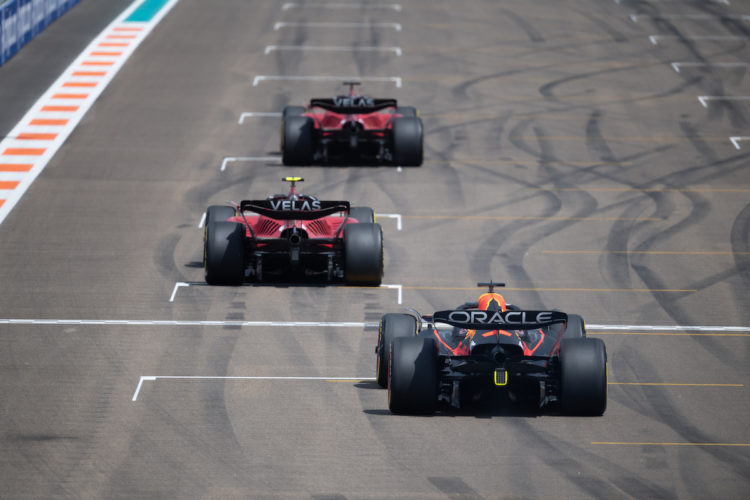 Ferrari is confident that Red Bull’s development pace will slow down as the 2022 season carries on due to the sport’s budget cap.

Formula 1 teams are currently operating under a $140 million cap in a bid to stop larger organisations from heavily out-spending other teams on the grid.

Red Bull has introduced a number of upgrades to start the 2022 campaign, and has taken three race wins from the opening five races.

But Ferrari is confident that the Milton Keynes-based squad will not be able to sustain the pace of introducing new parts as it gets closer to the cap limit.

“We are leading both championships which is great so we should not be too disappointed,” said Ferrari Team Principal Mattia Binotto.

“But it’s true that Red Bull improved their car, improved it since the very start of the season while they introduced upgrades.

“If I looked at the last two races, maybe they got a couple of tenths per lap faster to us.

“It’s no doubt that in order to keep the pace we will need to develop ourselves with new upgrades.

“I hope because there is a budget cap that at some stage Red Bull will stop developing otherwise I would not understand how they can do that but let’s see in the next races.”

Ferrari is set to bring upgrades to the Spanish Grand Prix in just over one weeks’ time, which Binotto hopes will see his team take a leap forward in pace.

“It could be at least our turn, try to develop as much as we can the car by introducing upgrades,” he said.

“I think it’s not a surprise that we may have a package in Barcelona which will be important for us.

“As usual, I hope the package we are introducing is working as expected and in that case, it can be a good boost in order to try and catch up the current gap we’ve got to the Red Bull.”